The airport is located east of the city of Almeria. It is an interesting place to fly to. There are some destinations close by such as Roquetas de Mar, Mojacar, and Cabo de Gata where people like to stay for vacation. In addition, it is also a good alternative to many other seaside resorts in the area. It is located on the coast, between Malaga and Murcia/Alicante and right next to the Playa Costa Cabana at 10-13 kilometers from the center. It has 1 runway (10,500 ft) and also 1 terminal. Flights are mainly with Iberia to Seville, Madrid, and Melilla.

The airport was only put into use in 1968. That doesn’t mean there weren’t flights to or from Almeria yet. There was an Aerodrome suitable for smaller, short-range aircraft. This was since 1932. The airport is focused on many domestic flights with Madrid as the main route. It also took years for the international route to be set up. There was only 1 flight a week to Paris with Valencia as a stopover. There was also a route to Barcelona. This city was then also used as a stopover for routes to the UK and Germany. Due to the increase in aircraft, the terminal was rearranged in 1995 with a new departures building. A new terminal dedicated to freight transport has also been opened and was commissioned in 2002.

Looking at the destinations, the Almeria Airport departures outside Spain are going to London-Gatwick by Easyjet year round. There are multiple domestic flights a week to places like Barcelona, Madrid, Melilla and Seville by Iberia as one of the regular flights.

Mainly destinations in the U.K. are popular during the summer months:

Other European options you can have are:

Airlines that fly to Almeria Airport

Once you have arrived at the airport terminal, the check-in counters are the first to the right. Once you’ve checked in, go through security in the middle of the building to get to the gates. 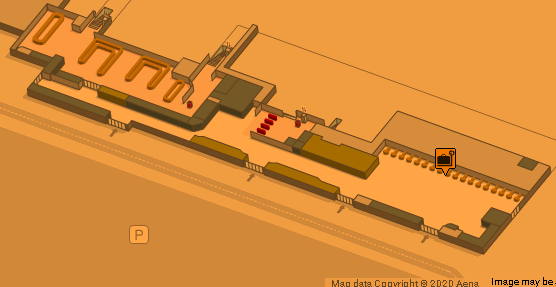 Last year there were 12 thousand LEI departures and arrivals to transport one million passengers. Because of the corona virus the Almeria flight departures decreased a lot to only process 200 thousand passengers.