Alicante-Elche Airport is called ‘Aeropuerto de Alicante-Elche’ in Spanish. It has the international airport codes ALC and LEAL. The airport is one of the busiest airports in the Spain. It is an important destination with many ALC airport departures for many tourists from the north of Europe. The location of the airport is 6 miles east of Alicante city. It serves the region of Murcia and Valencia city is also only 99 miles from the airport. It is a base for the carriers Norwegian Air, Vueling and Ryanair with most destinations and passengers from the UK.

The first Alicante live departures already took place in 1967 to take over La Rabassa. The first commercial scheduled flights were from Alicante to Madrid in 1969. The Alicante airport departures also started in that year to Barcelona. The following year in 1970, the first million passengers of the year were already reached. In the 1980’s the runway was then extended to 9,800 feet (3,000 meters). There were 2 terminals in place in 2011. These were replaced in March that year and subsequently ALC departures took place in the new terminal. In this terminal there are 96 check-in desks to start your journey. These are check-in desk are on Floor 2. The Alicante departures take place at 40 different gates, most of which are going to Schengen countries.

When arriving at the airport you should head to Floor 2 for departures. There are the check-in counters to go via security to the gates: 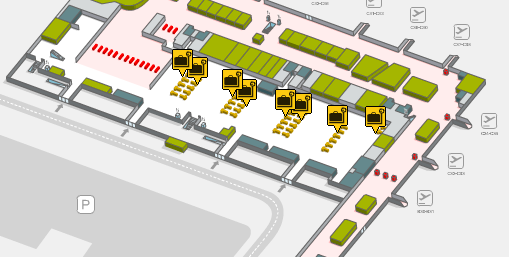 The airport is not very large with 15,047,840 passengers in 2019, but it continues to grow over the years. It is becoming more and more popular among holidaymakers. Most of the Alicante Airport departures go to cities in the UK such as London Gatwick and Manchester. Far beyond in numbers will be the airports:

Ryanair has most Alicante departures followed by Easyjet and Vueling. Other frequent Alicante flight departures are with the following carriers:

You could use the following GPS coordinates to travel to the airport: 38.287516, -0.553481. You can of course also use the address at the top of the website or the name of the airport in Google Maps, for example.

There are official taxis at the airport. This is the Radio Taxi Elche. They are often white and have a large green stripe in the middle of the car. They also have an information point in the terminal. However, it is often only open from 9 a.m. to 1 p.m.

If you want to travel further with the TRAM or train service, you will first have to travel by taxi or bus to Luceros station. Bus route C6 runs to this location with departures every 20 minutes. From Luceros you can go to Benidorm, El Campello, Plaza La Coruna or Saint Vicent del Raspeid.

The main bus line is the C6. This has Alicante airport departures to the city center. The bus runs daily from 7 am to 10 pm with departures every 20 minutes. There are also buses that go to other places. For example, Bus line 1A goes to Elche, Alsa Bus to Benidorm, and there is a connection to Torrevieja.