Under normal circumstances, more than 20 million passengers use Johannesburg Airport. Due to the pandemic, this was halved, but it is slowly rising back to the old numbers. Many flights are operated by Airlink to domestic airports or destinations in the region. In addition to many small airlines from the region, larger carriers from all over the world also fly to the airport. This is partly possible due to the extra long runway of more than 4.4 km. In addition, there is a second runway of 3.4 km. There are several terminals to keep everything running smoothly. That is why there is a division of transit, domestic and international flights.

The very first JNB airport arrivals took place in 1945 when it started as Palmietfontein International Airport. The airport was prosecuted about seven years later. In the 60’s and 70’s the airport grew steadily in facilities. The first flight to London was in 1971. During Apartheid in the 1980’s, all flights were canceled for some time. In 1996 it became the busiest airport in Africa to put Cairo Airport in second place. Over the past 10 years, the airport has slowly grown from 19 to 22 million passengers per year. In 2020 the OR Tambo flight arrivals were considerably less with 7 million passengers. JNB arrivals are mainly for the city of Johannesburg and people who want to do a safari. 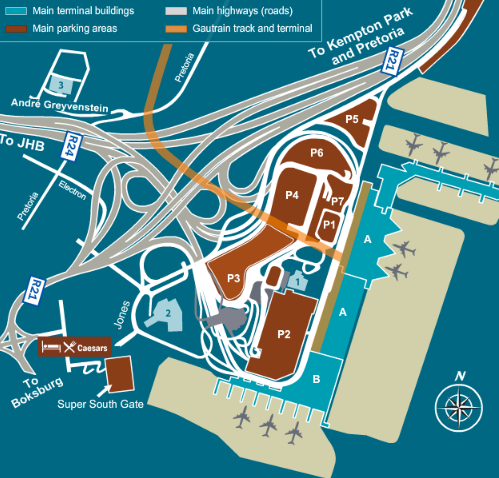 There are considerably more international OR Tambo flight arrivals compared to the other airports in South Africa. In 2019 there were 21,665,403 passengers. That was accompanied by 218,208 Johannesburg Airport arrivals. In 2020 there haven been a big decrease of passengers.

Most domestic flights are operated by the following airlines:

The international O. R. Tambo arrivals fly from all over the world. A few important ones are:

Most domestic flights go to:

The taxis are waiting in front of terminal A of the airport. This is the international arrival terminal. It is recommended to only take an official taxi with a meter. These taxis can be recognized by the sign with ‘taxi’ on it in yellow letters. A taxi ride from the airport to the center of Johannesburg with an official taxi costs about 20 euros. The journey takes more than half an hour.

The Gautrain runs every 12 minutes between 05:15 AM and 10:00 PM from the airport to Sandton Station. Here you can transfer to the train to Park Station, close to the center of Johannesburg. The total journey time is about 30 minutes, the price for a one-way ticket is 178 ZAR. You need a Gautrain Card to travel by train, which can be bought at the airport and in the city for 17 ZAR each.

You can easily rent a car at the airport. There are well known car rental comapnies like Avis, Europcar, Hertz etc. Also, local ones are available like First Car Rental, Tempest, Bivest, Woodford and some others.

There are many hotels near the airport. If you do have a stopover, early flight or a late arrival, then there are 2 obvious options to use as a transit hotel and 1 on a short distance. They all score good reviews online. 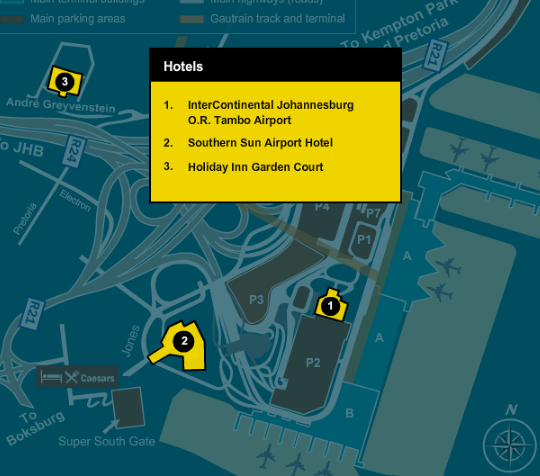