The airport was only opened 10 years ago, just before the World Cup Football. It replaced the Durban International Airport. King Shaka is located 20 miles from the center of Durban. The airport was built in response to the increasing international flights. However, most flights are still domestic to the other popular destinations of Cape Town and Johannesburg. There are a total of 2 terminals, 1 for passengers and 1 for cargo aircraft. There is 1 runway to process all flights.

Traveling to the airport could be either by car or public bus.  By car (taxi, rental car, etc.) it takes about 30-40 minutes to have Durban arrivals. This costs around 600 ZAR (32 USD) by taxi. When traveling by bus you should expect a little longer drive. It is a lot more budget friendly as well with just 80 ZAR for the trip.

The airport has 1 terminal fot its Durban airport arrivals. There are 3 floors in the terminal, of which the ground floor is for the Durban flight arrivals hall, the first floor is for check-in counters and the second floor is the lounges. At both the departure and King Shaka arrivals area there is a separation after security for domestic and international Durban Airport Arrivals. 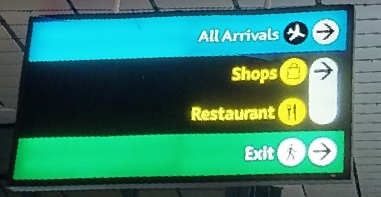 There is 1 runway of 12,100 feet. With this length, DUR Arrivals are possible for the largest aircraft such as the Airbus A380 and Boeing 747.

There are not many international Durban King Shaka Airport Arrivals. Those who do have a route are Turkish Airlines from Istanbul, Qatar Airways from Doha, Emirates from Dubai and Air Namibia from Windhoek. There are also flights to the beautiful Mauritius with Air Mauritius. Some of these routes are temporary canceled due the pandemic.

The domestic Durban Arrivals are with the airlines Airlink, British Airways (also flying to London Heathrow), FlySafair, Mango, Kulula.com and CemAir. Despite the limited international air traffic, it has doubled from ten years ago. The domestic flights continues to grow steadily. In the year 2019, there were 6,099,628 passengers at the airport which was a record. That were 50,753 King Shaka flight arrivals.