Cape Town Airport is the largest airport after Johannesburg Airport. Cape Town is located in the southwest of South Africa. The airport is located about 10 miles east of the city center. More than 10 million passengers fly to and from this airport every year. About eighty percent of passengers fly on domestic routes, with the route between Cape Town and Johannesburg being the busiest. The airport has two runways, a main terminal, an international terminal and a domestic terminal. The airport is modern and well-arranged.

Cape Town International Airport is located about twenty kilometres east of the center of Cape Town. Highway N2 connects the airport with the city center.

The airport has a separate section in the terminal for the CPT departures. Domestic and international are handled separately after security / immigration. The departures hall is at level 2. After check-in and security, you should turn left for international Cape Town departures and right for domestic flights. 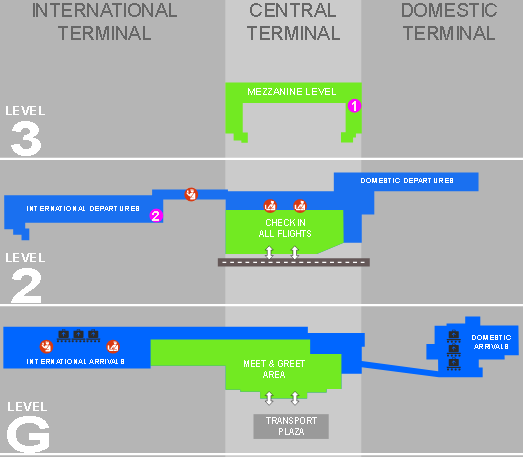 There are 2 land tracks, 1 of which can be used for larger aircraft. There are about 94 thousand Cape Town Airport departures every year (Departure times Cape Town Airport). In total there were almost 11 million passengers in 2019. Most CPT departures are domestic with 80 percent. These are mainly operated by the airlines South African Airways, Mango, Kulula, LIFT Airline, FlySafair and Airlink. International flights to Paris, Hong Kong, Atlanta, Amsterdam and Frankfurt are operated by Air France, KLM, Delta Air Lines, Lufthansa, Cathay Pacific.

There are different ways to travel from the airport to the city. With a taxi or Uber you can reach to the city center within half an hour. Depending on traffic of course. Be careful when taking a taxi because illegal taxi drivers try to recruit customers in the arrival hall. It is better to opt for the official taxis that are outside the taxi ranks. You can of course also order an Uber. You then know exactly what you have to pay in advance for your ride to your final destination in Cape Town.

Cape Town airport departures by bus is a cheap alternative. There are buses that run from the airport to the the center of Cape Town. From there you still have to get to your accommodation. Buses run until 10 pm.

Many people go for the option to rent a car. This way you have the freedom to travel around. The offices of various car rental companies are located directly opposite the terminal. You get walk through a tunnel to get there.

We recommend that you reserve your rental car in advance. This prevents unpleasant surprises on site such as high prices or no availability.