Cape Town International Airport is located in the city of Cape Town (Cape Town) just 10 miles from the center and the sea. The destination is internationally popular for its seaside location and there are many CPT arrivals from Europe, America and Asia. Both domestic and international flights are offered. Most planes come from the cities of Durban and Johannesburg with a wide variety of airlines. Some of these are British Airways, FlySafier, Comair, Airlink and Lift Airline. The international flights remain largely in the region of the south of the African continent, but also the Middle East or Europe. International flights are operated from Runway 01-19 with a length of 3,200 meters. The other runway is only 1,700 meters and only available for the smaller aircraft. There is a separate terminal for both international and domestic transport. An average of 10 million passengers pass through the airport every year.

Travel to the city center in 30 minutes by car/rental car/taxi and 40 minutes by bus. A taxi ride to the center costs ZAR 500 (USD 35). When you arrive at the airport there are several parking options. There are metered and licensed taxis available outside the arrivals level. For a cheaper option you could go for a rideshare. Available rideshares are Bolt and Uber.

For the drop-off zone, continue until just before the terminal. You arrive at level 2 in front of the check-in counters. You can go to the departure area through security. This is divided into 2 parts. The international and domestic arrivals. This is also the case with arrivals. At international Cape Town arrivals you must first go through the passport control and then to the baggage reclaim area. With domestic flights you can go directly to the baggage belts. Then there is a communal meet & great area to end up at transport plaza. 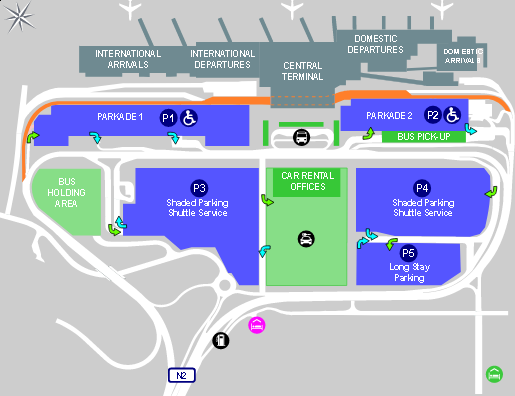 Flight routes with destinations and airlines

With 2 runways (1 small), most planes can land here. There are mainly many domestic Cape Town arrivals with a market share of 80%. Most of these CPT arrivals are from Durban and Johannesburg. Other less flown destinations in South Africa are Port Elizabeth and Bloemfontein.

International arrivals are available with flights from:

The current airport replaced Wingfield Aerodrome in 1954. Initially there were mainly domestic and regional flight routes. There were some direct flights to the UK and later in 1977 even to Rio de Janeiro. After the Apartheid in the 90s, the airport took over ownership. The state sold it to Airports Company South Africa. Soon there was a flight to Miami with the airline South African Airways. This changed to Fort Lauderdale and later even to Atlanta. The growth of the airport increased from 6 million in 2004 to almost 11 million in 2019. In the meantime, the necessary changes have been made. The terminal has been renovated and renewed several times. The capacity had to be increased as well as the length of the runways.