Doha Hamad International Airport is one of the largest airports in the Middle East along with Dubai and Istanbul. It is the base for Qatar Airways. It is a fairly new airport because it opened in 2014. It is located to the east of the city of Qatar in Doha. It is 9 miles from the center of Qatar and can be reached by taxi in 20 minutes. The taxi costs 45-55 QAR. You can also take the bus to the center. There are several bus departures to different locations in the city. You can also be in the center in just 15 minutes by metro. There are DOHA airport arrivals by metro at West Short Term Car Park.

At the airport there is a large multi-storey terminal. Starting with Level 0. Here is the DOH arrivals hall with baggage claim and exit to the taxis, rental car companies, public transport. This level also includes the check-in counters section. One floor higher on level 1 are the gates where you come through security after check-in or simply upon arrival with your flight. Upon arrival you could also get to level 2 for the transfer area. All gates are divided into different Concourses: A with 10 gates, B with 10 gates, C with 13 gates, D and E each with 9 gates on level 1 and 2. Expansions are also underway to increase the capacity of Doha airport. . 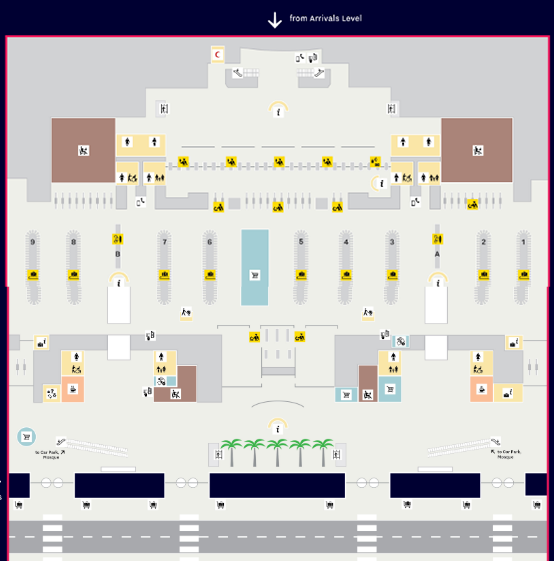 Qatar Airport arrivals take place on 2 runways of 13,950 and 15,900 feet. This makes it one of the top 10 longest runways in the world. Doha airport arrivals regarding Cargo is mainly responsible for Qatar Airways Cargo. There are also occasional flights from Cargolux and Turkish Cargo. Doha Airport arrivals are increasing every year (2020 and 2021 will be exceptions due to corona). Most Hamad Airport arrivals are flown by Qatar Airways. Doha is the home base of this airline. There are escape routes to all over the world. It is of course not the only airline. There are also many Doha Arrivals from India. These are operated by Air India, IndiGo and GoAir in addition to Qatar Airways. Major destinations in India are Mumbai, Kochi, Bangalore, Delhi, Chennai and Hyderabad. There are many Qatar Arrivals from the region, but also from far intercontinental destinations. There are for example Hamad Arrivals from Air Canada from Toronto, British Airways from London, Jazeera and Kuwait Airways from Kuwait City, Nepal Airlines from Kathmandu, Royal Air Maroc from Casablanka, Turkish Airlines from Istanbul and many other destinations to Kuala Lumpur, Melbourne, Sydney, Tokyo, Singapore, Bangkok.