Gdansk Lech Walesa Airport (IATA: GDN) is the international airport of the city of Gdansk in Poland; it is close to the Tricity metropolitan area. Named after former Polish President Lech Walesa, you will see the airport logo that is Walesa’s signature, a stylized “W” on the terminal wall. The Gdańsk airport arrivals can experience great views.

Some of the top routes

Gdansk Lech Walesa Airport serves the Polish state of Pomerania, which includes the Tri-Cities (Gdansk, Sopot, and Gdynia). Since 2004, this airport has been named after Lech Walesa, the former president of Polonia. It is considered the third airport in the country by the number of passengers it receives per year and the Gdańsk arrivals keep increasing over the years.

This airport was opened in 1974 for the first Gdańsk flight arrivals near the town of Rebiechowo and replaced the previous airport that was located in the center of the suburbs of Wrzeszcz. Since 1993, the airport has operated as a private company. It is used as an alternative airport to Warsaw Frederic Chopin Airport in emergency or bad weather. 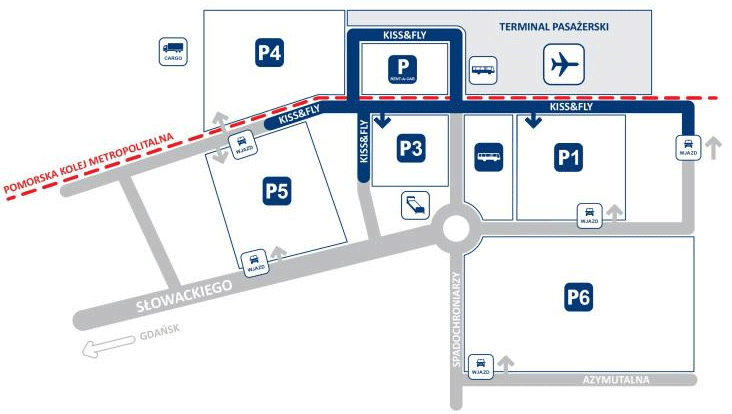 The airport has a public transport service that connects it with the following places:

Gdańsk arrivals by bus: There is also a N3 night bus that runs to Gdańsk-Wrzeszcz Train Station and Gdańsk Main Train Station. PKM is the Pomeranian Metropolitan Railway and connects Gdansk Lech Walesa Airport with Wrzeszcz, the center of Gdansk and Gdynia Glowna Train Station.

After your Gdańsk flight arrivals you can also travel further by taxi. They also offer you a taxi service available in the Gdańsk airport arrivals hall; it is the fastest way to get to the center of Gdansk. Additionally, you can also rent a car, the offices are in Terminal 2, and the available companies are Budget, Express, Avis, Hertz, Sixt, and Enterprise.

Gdansk Lech Walesa International Airport has a single asphalt and concrete runway to process all GDN airport arrivals. The runway is in the direction of 11/29 and is 2,800 meters (9,200 feet) long. It has a modern ILS CAT II that allows planes to land in cloudy weather.

The runway has eight exit streets that lead to 5 parking platforms to choose from when having Gdańsk Lech Wałęsa Airport arrivals. It allows parking of 18 medium-size aircraft such as Airbus321 and Boeing 737.

The Gdansk Lech Walesa International Airport has two passenger terminals to have GDN arrivals that are: Terminal 1 and Terminal 2. Terminal 1 was built in 1993 to process Gdańsk airport arrivals for countries not in the Schengen area (boarding controls and passports). This terminal is connected to terminal 2 through a jumper.

Terminal 2 was inaugurated in 2012 for Euro2012. It is the newest and most modern terminal; it has all the services for the comfort of the passengers.

The main airlines that use this airport frequently are:

The most frequent destinations to fly from and have GDN arrivals are: