The airport is located on the North Island of New Zealand. Located there in the south near the capital Wellington. The airport is not that big despite being near the capital. Auckland is by far the most popular in the country. That’s because it’s New Zealand’s international airport and it’s the country’s largest city. There are many daily flights to this city to have more international options. Furthermore, most flights are domestic. The country is long stretched out and also consists of two large separate islands. The carrier Air New Zealand offers the most flights.The numbers of passengers using Wellington Airport each year are slowly increasing with 6.5 million in 2019 as a record. Furthermore, use is made of 1 terminal and 1 runway of 2,080 meters.

You can be at the airport in 15-20 minutes by car from the center of Wellington. The taxi costs 40 NZD. If you travel with a rental car from Avis, Budget, Enterprise, Europcar, Ezi Car Rental, Hertz or Thrifty, you can also leave the car at the airport. There is also a bus connection that takes 30 minutes.

There is 1 terminal. On the ground floor, the arrival area end with the baggage reclaim area. For Wellington departures, the journey starts at level 1 where the check-in counters are. Then, go through security to the gates to take the only 6,800-foot runway available. There is a distinction after security for the domestic and international WLG airport departures. 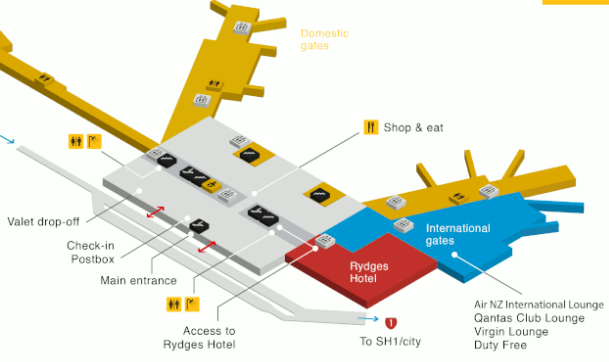 Wellington Airport is an airport that has been around for almost 100 years. Most Wellington airport domestic departures are going to Auckland which is used as a hub to fly to many destinations in Asia. There are international Wellington flight departures to the coastal cities of Australia. Most go to Sydney, followed by Melbourne and Brisbane. In addition to Australia, there are some flights to Nadi on the Fiji Islands. In addition to the local airlines Air New Zealand, Sounds Air, Originair, Air Kaikoura and Jetstar Airways, there are of course also the Australian airlines with Virgin Australia and Qantas.

There are also major international airlines that use Wellington as a stopover and fly back via Christchurch or Auckland. There are normally around 100,000 Wellington Airport departures annually. This is expected to be much lower in the coming year.