Most of the international flights have been ceased due the pandemic. When you want to fly internationally it’s best to have a stopover at Auckland to fly to your final destination.

Wellington Airports had quite a history. It started with the name Rongotai in 1929. However, it had to close 20 years later due to safety reasons. In the winter it was not usable for Wellington arrivals when there was bad weather. The runways were made of grass. About 50 km north of the city, Paraparaumu Airport was opened for public flights. For further development, the terminal had to be relocated a few years later. It was opened in 1959. In order to land larger aircraft, the runway had to be extended by 300 meters to 1936 meters. In 1987 the old terminal was restored and the new terminal was expanded. Despite the renovations, consideration was given to realizing a new airport. However, this fell through and a completely new terminal was built, which was taken into use in 1999.

The airport terminal has several floors. On the ground floor, the Wellington arrivals come for their luggage where there are 3 belts. For check-in and departure, security and gates you have to be on Level 1. On Level 2 is the New Zealand Air Lounge and you can go to the Rydges hotel. 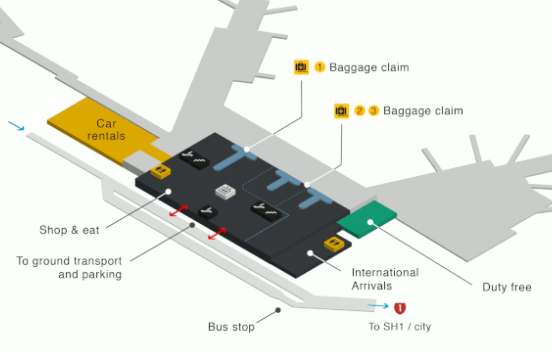 There is 1 runway available. It is not very long, so the largest planes will not land there that quickly. Most flights (up to about 80 percent) will be domestic during normal conditions. During the corona it is often even 100 percent domestic Wellington Airport arrivals. The international WLG arrivals almost always fly from Australia with main airports Sydney, Melbourne and Brisbane.

There are also some Wellington flight arrivals from Fiji such as Nadi airport. These flights are operated by Fiji Airways and to Australia with the carriers Air New Zealand, Qantas and Virgin Atlantic. The Wellington airport domestic arrivals can be followed from Air New Zealand, Sounds Air, Jetstar, Air Kaikoura and Originair.