The airport is located near the city of Christchurch on New Zealand’s South Island. After Auckland Airport, it is the busiest airport in the country with almost 7 million passengers a year. Due to the time difference and long flights to international cities, the airport is open 24 hours a day. Due to its location and long flights, large aircraft will have to be able to land. The Airbus A380 and Boeing 747 have that option on the 3,300-meter runway. There is also a small runway of 1750 meters and a grass runway of 515 meters. New Zealand carries out most Christchurch departures at the airport.

The airport began with the purchase of a large plot of land in 1936. A year later, construction of a runway and terminal began. A few years later, the first Christchurch airport arrivals took place. A decade later it was able to serve international destinations as well. A second runway was added and a new terminal was built in 1960. Aircraft became bigger so the runways had to be extended again. More long-haul flights were also added. Attention was also paid to domestic flights. The number of routes increased and so did the frequency. That is why the terminal was extended in 1975 with a new pier of 16 thousand square meters. In 1984 the runway was again extended to what it is today, 3,387 meters. In the twenty years since, improvements have mainly been made to the terminal to provide better service. A new terminal was built in 2011 with a joint check-in for national and international flights, separate Christchurch arrivals baggage area and more.

Christchurch International Airport is located on the south island of the country of New Zealand. It is situated west of the city of Christchurch, which is located on the east coast. You can be there in 20 minutes by car from the city center. This is of course possible by taxi (55 NZD) but also in a rental car from Avis, Europcar, Hertz or Budget. There are also CHC airport arrivals by bus. It takes a little longer by bus, but it is a lot cheaper.

There is 1 terminal for international and domestic flights. Christchurch domestic arrivals have a separate area for the departure and arrival and baggage reclaim area. Christchurch flight arrivals lounges and gates are located on floor 1. 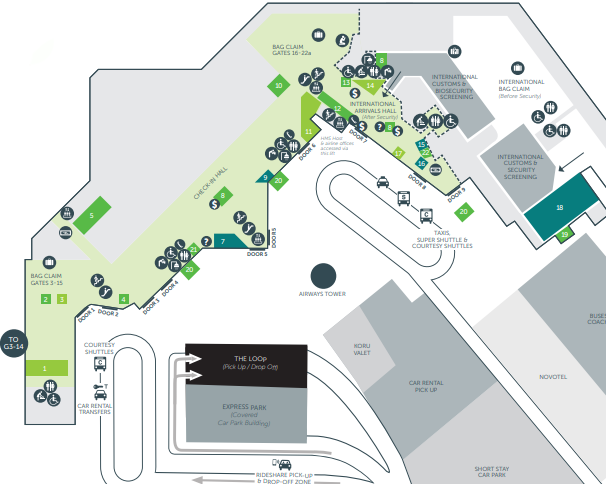 There are 3 runways of different types. 1 is short and grass, 1 is only 5,700 feet and the longest is 10,800 feet. The latter is largely used for passenger and cargo Christchurch airport arrivals.