The Guadalajara International Airport of Mexico is officially known as Guadalajara Miguel Hidalgo y Costilla International Airport. The airport is 16 kilometers away from the city center of Guadalajara. Its foundation was in 1966, and it have one of the most Guadalajara departures in Mexico, with two terminals and two runaways. The airport stays busy throughout the day, with various flights departing from it to other places in the country itself, the United States of America and Central America.

Flight timings and destinations from Guadalajara

There are some flights to Panama City, Vancouver and Europe such as the destinations Paris, Madrid, and Frankfurt. For the rest, all international flights go to the US. In addition to the well-known major cities, there are also flights to Sacramento, Portland, Reno Tahoe, Oakland, Fresno Yosemite, and Ontario.

The global pandemic has made several changes in the transport facilities of the world. Guadalajara has been no exception. However, with the relaxation with the quarantine and daily lives trying to adjust with the new atmosphere, the flights are scheduled to carry the passengers. The airport conducts its departing schedule from six in the morning. Out of all the airlines, Aeromexico has a tight schedule to carry passengers to Mexico city wit most Guadalajara Airport departures. Meanwhile, airplanes run by Volaris are making their round to Hermosillo, Cancun, Los Angeles, and Houston. The passengers can take a flight from this airport to reach all the important cities in the US and Central America. 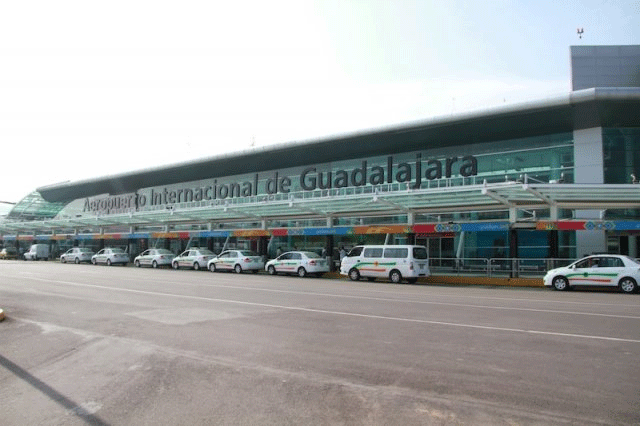 Almost all the famous airlines of America and Mexico have GDL departures to this airport, departing now and then. Thus, allowing the customers to choose from any one of the below for their desired destination:

Due to the global pandemic, there was a drop in passengers’ percentage taking flights from the Guadalajara international airport. According to data, 2019 records the highest number of Guadalajara airport passengers. The rate peaked in that year but dropped gradually because of the global pandemic in the next year. 2019 has seen passenger traffic of 14,823,592, and in the next year, it saw around 8,125,600 Guadalajara flight departures. In 2020 the rate of change was 45.40%, the highest negative change in the Guadalajara International airport’s history.

Usually, the rate of change in passenger traffic stays positive, with the percentage being around 3% to 12%.

On the other hand, Los Angeles holds the first position of the total number of passengers flying from the airport among the international route. It is no surprise there are most Guadalajara departures to LA has topped the chart . It is, after all, the most happening city of the US and the land of American dreams. It holds a record of 269,725 numbers of passengers taking flights operated by Aeromexico, Delta Air Lines, Alaska Airlines, VivaAerobús, and Volaris.

Guadalajara has the busiest time from 2016 to 2019. Now, people are hungry for travel and an escape. The Future can determine that after the pandemic leaves for good, passenger traffic will speed back to the glorious number. Thus, increasing the rush of the airport.