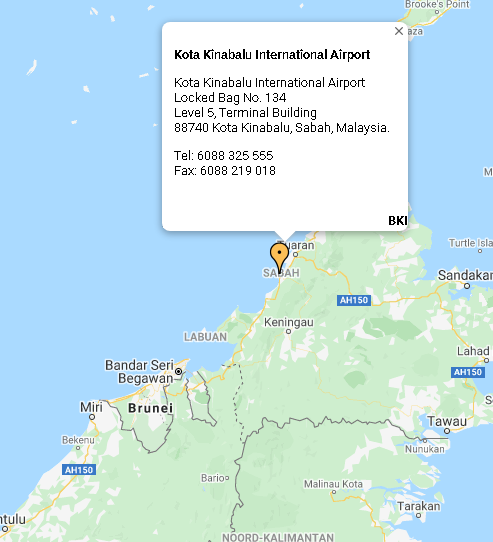 Kota Kinabalu International Airport assists the Kota Kinabalu city, the capital of Sabah, Malaysia. It is the second busiest airport in Malaysia by several passengers, the first being Kuala Lumpur Airport.

Kota Kinabalu International Airport is located 8 km (5 miles) southeast of downtown Kota Kinabalu. It is the main gate to the state of Sabah and the island of Borneo. The new terminal 1 building was inaugurated in 2008, and its remodeling offers greater comforts and attractions to passengers passing through this air terminal.

This airport began as a military airfield built in World War II by the Imperial Japanese Army.

From the airport, you can take a bus that will take you to the city of Kota Kinabalu. On level 1, you should look for the bus stop in the arrivals area of the main terminal. The bus goes from the city to Terminal 1, Terminal 2, and then returns to Kota Kinabalu. The frequency is 30 to 40 minutes.

You can take a taxi from the airport to the city. Go to the taxi counters and get all the information you need. The trip can last 20 minutes.

Another option to get from Kota Kinabalu airport to the city center is by renting a car.

Kota Kinabalu International Airport has two terminals which are: Terminal 1 and Terminal 2.

Terminal 1 is the main terminal at Kota Kinabalu Airport and the newest building. It can handle 9 million passengers each year.

It has three levels and 64 check-in counters for international flights and domestic flights. It has cafes, restaurants, ATMs, duty-free shops, and much more.

Terminal 2 is the oldest building in the airport and handles domestic, charter, and VIP flights. It has 26 check-in counters and is divided into the departure area and the departure area. It is suitable for low-cost airlines and charter airlines. This terminal has six parking lots for B737 and A320 aircraft.

This terminal offers restaurants and cafes, ATMs, shops and Duty-Free, and more.