The airport is actually the only one that conducts commercial Beirut flight departures in Lebanon. It is located south of the capital, about 9 kilometers from the center. Most Beirut international airport departures are with the national airline MEA (Midle East Airlines).

The first flights from the airport were already carried out in 1954. It then took over a much smaller airport located nearby. Due to an Israeli assault and Lebanese civil war, the airport has not had an easy time. Only in 1994 did a reconstruction start with a completely new terminal for Beirut Rafic Hariri departures a few years later. There was access for 12 gates with an extension to 23 boarding gates a few years later. This has ensured that there was a capacity for 6 million passengers per year. Subsequently, runways were replaced and added to increase the Beirut airport departures. Due to a new war in 2006, many damages were again inflicted on the airport. It was reopened for commercial flights a few months after the damage caused by the war. Finally, even in 2018 there have been Rafic Hariri airport departures from the largest passenger plane (A380) in the world.

A newly renovated terminal was opened at Beirut Airport in 2019 to expand the passenger and cargo Rafic Hariri airport departures.

There is 1 terminal, which is seen as the main building, followed by a West and East Wing to which all gates are linked. The renovated terminal has 23 gates. 21 gates have a walkway to the aircraft, 2 of which can also be used for large aircraft such as the Airbus A380. In the main terminal are lounges, restaurants, and shopping options. There are several floors:

With an average of 70 Beirut Rafic Hariri airport departures a week, passengers fly with AtlasGlobal, Pegasus Airlines, Middle East Airlines and Turkish Airlines to Istanbul Airport. Around a million people will fly this route every year. Other popular airlines are: 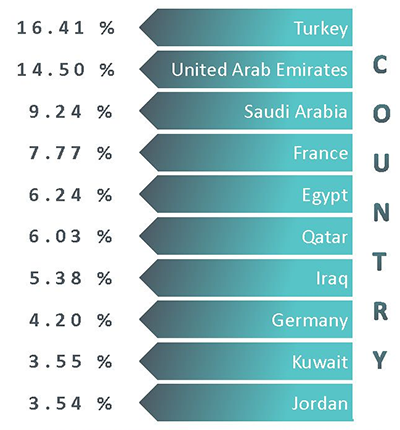 Most Beirut departures are going to Turkey (Istanbul) followed by the United Arab Emirates (Dubai and Abu Dhabi).