If your goal this year is to travel the entire Baltic region in Europe, you can meet it from Riga airport. This Latvian airbase is one of the most important Baltic regions for you to travel safely. It is a very large airport operated by Ryanair, Wizz Air, and AirBaltic who offer most Riga departures.

You can learn a little more about the airport before taking Riga flight departures there. Find out where the airport is located and the means of ground transportation you will have at your disposal.

There are many more routes in Europe to the big cities but also to smaller less well-known ones. There are also extra routes to holiday destinations such as Antalya, Gran Canaria and Hurghada in the summer months or winter months. There are not many intercontinental flights. Some have also been discontinued due to the pandemic. There are still flights to Tel Aviv, and Dubai.

In 2019, the airport reported 87 thousand air movements in which it accommodated 7,798,382 passengers with different destinations. It is an airport widely used by American and European tourists who want to know the Baltic states.

The airbase is located in the capital city of Riga in Latvia, which belongs to one of the countries of the Baltic region. The airport is located exactly in the municipality of Marupe, west of Riga, about 10 km away.

As a tourist, you must find out enough about the airport and the means of land transportation available:

At Riga International Airport, there is an airstrip for Riga airport departures with the address 18-36. It is a runway that is 10,500 feet long and has a concrete-asphalt surface.

The airport only has one passenger terminal to process all RIX departures that divides its operations into two floors that were expanded in 2006. You will find 36 check-in offices, a baggage area, and the customs post in the terminal. The terminal has ten boarding gates, two waiting rooms, and a VIP lounge for the airport’s hub airlines. The terminal is separated into sections A, B, and C. The section of A is not used for check-in and departures. This is for Terminal B and C. The difference between these two parts is that B is used for all flights to Schengen countries in Europe. Terminal C goes to all other destinations. 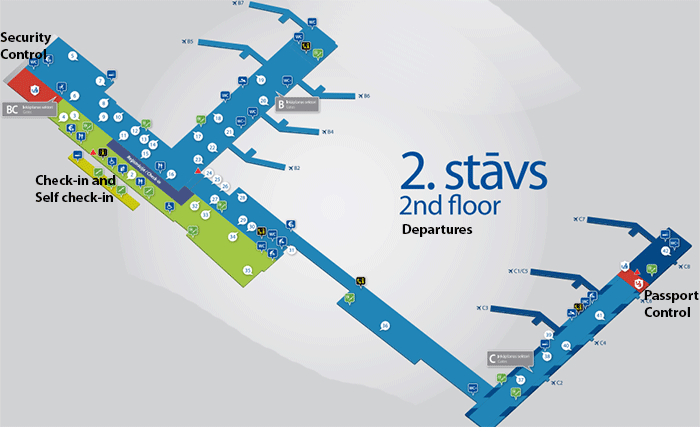 You can have a large AirBaltic lounge in this terminal that offers all Riga departures in the Baltic region. The airline works every day for you to contact at any time and buy your tickets.

At the airport, you will have several operating airlines that offer seasonal or direct RIX airport departures:

If you want to request cargo flights from airport Riga, you can contact the Eleron airlines company. This airline can send or receive packages from Kyiv-Zhuliany in Ukraine.

If you decide to fly from Riga International Airport, you will have some destinations with Riga airport departures such as: