Montego Bay Sangster Airport is the busiest airport on the island of Jamaica. In recent years, the figures for passengers have been steadily increasing. Despite the same amount of Montego Bay airport departures, the occupancy rate in the aircraft is higher. Many of the flights that take place are international. Every year about 4 to 5 million people come to spend their holidays on the beautiful island. In the almost 20 years that the airport has existed, it has won several awards. The Caribbean’s Leading Airport has even been 14 times! This holiday destination is well-received all over the world. There are even 60 direct flights and an infinite number of more that come through the stopover for vacation.

The first MBJ flight departures were in 1947 what was mainly used by the wealthy. The first flights were from Pan Am Airways. Only a few years later the airport was taken over by the government. In the early years, the terminal was moved to increase the increase in passengers. In the meantime, it has become the country’s busiest airport. Due to the many Montego Bay flight departures, it has gone up to 4.8 million passengers in 2019. In 2020, unfortunately, the pandemic reduced this to 1.6 million. There are also many Jamaica airport departures for the purpose of transporting cargo freight. In addition to flights to other islands, IBC Airways has a route to Miami.

Many of these destinations are the well know bigger airports like the following:

Other frequent flight departures go to Canadian cities like:

If you want to fly to Europe you can have Montego Bay departures to:

Of course there are regional flights as well with smaller air planes. Think about other islands in the Caribbean like Kingston, Providenciales, Cayman, and some more.

The entrance is on the left at the terminal building. Upon entry there is a check-in area for domestic and international flights. You will then go through the passport / security to the Montego Bay airport departures lounge for boarding at the gates. 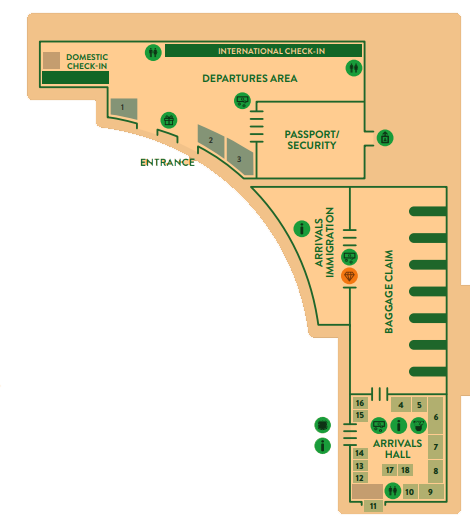 There are several car rental companies when you arrive at the airport. In the arrival hall you can rent a car from Avis, Enterprise, Alamo, National. Island car rental and Thrifty.

When you arrive you want to quickly go to your hotel. Montego bay departures with JUTA or JCAL taxi are possible. These are located outside the terminal. There is a joint desk for these two companies.

There are many tour operators present at this typical holiday destination. Many have their own counter number where you depart from.