It is time for you to take a few days of vacation in Italy and land at the distinguished airport of Brindisi. Although this airbase is not the only one in Europe, it is undoubtedly one of the most important in the region’s south for Brindisi departures. You can know some details of the airport and be convinced of its functionality.

Most flights from Brindisi go to the north of Italy and especially the Milan region. About ten planes a day go to:

The carriers you could fly with are Ryanair, Italia Trasporto Aereo, Wizz Air, and Easyjet. For many Italians Brindisi is seen as a holiday destination. Rome Fiuminico is closer but also an important route. Italia Trasporto Aereo flies three times a day to the city on the coast where you can also take the boat to Greece. Other options within Italy are:

However, there are more choices when entering the summer months like Palermo and Catania in Sicily which are demanding routes from all Italian cities during that time.

There are only a few routes with international flights during the winter months. Those options are:

You can fly these routes about twice a week. In summer it will be more frequent. Because Brindisi is a summer destinations for most, many airlines start flight routes to the south of Italy. From the UK there will be flights of British Airways from London Heathrow and Ryanair from Manchester. Other options with airlines like Austrian Airlines, Eurowings, Luxair, Transavia, TUI, and Volotea are:

Brindisi airport has operated since 1920 for Brindisi flight departures as a civil-military facility that would later become public after the end of the war. It is a very visited airport due to its proximity to the beaches in Italy and other tourist spots. The airbase offers many domestic BDS airport departures and the occasional international destination by stopover.

Ryanair is the airline that uses Brindisi airport as a focus city alongside other distinguished companies to offer most Brindisi airport departures. In 2019 the airport could accommodate more than 2 million passengers with 21 thousand air movements.

Brindisi Airport is located in Brindisi, which is in southern Italy in the Apulia region. You have to travel about 4 miles from Brindisi to get to the airport.

If you arrive at the national airport you can have some means of public transport that differ in cost and comfort:

Brindisi airport has a single building that is divided into commercial premises and check-in counters to start your BDS airport departures. The terminal has more than a decade since its modernization in which new public services were included. You can find a wifi zone, VIP lounge, taxi service, and car rental. 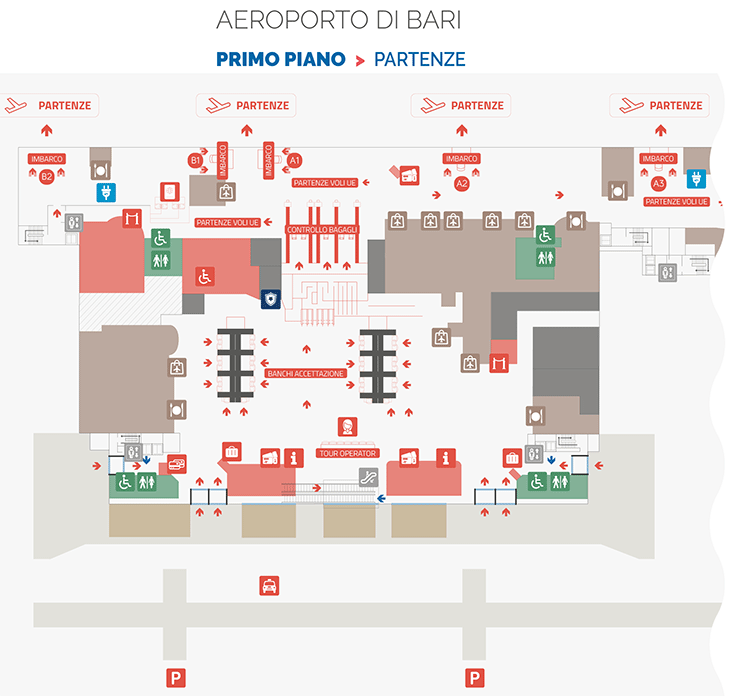 Inside the terminal, you can directly contact airlines such as Wizz Air, Neos, DAT, and Ryanair that offer Brindisi airport departures. Brindisi airport has two runways for its commercial flights.