The airport on the Indonesian island has two terminals. They have separate flights for international and domestic Bali airport departures. These terminals are next to each other, in connection by a corridor with shops and eateries. Both terminals have recently gone through a renovation to cope with the increasing DPS departures. Denpasar is the capital of Bali, but the airport is much closer to the popular tourist beach Kota Beach.

It is one of the busiest airport in Indonesia country. Only Soekarna Hatta in Jakarta is a larger and busier airport. Every year it is becoming increasingly crowded and has grown from 8 million in 2008 to 25 million passengers per year. Many airlines come to the airport from many different destinations around the world. This is done via the 3,000 meter long runway and two passenger terminals.

The airport Bali Denpasar is named after I Gusti Ngurah Rai, a commander of the Indonesian independence fighters in Bali. He was killed by the Dutch army in 1946 during the Indonesian War of Independence. The first Denpasar departures started in 1931 at Tuban airfield which was used by the Dutch. During the second world war there were expansions to both the terminal and the runway. In 1968, a new airport was built which is called Ngurah Rai International Airport. The final runway as it is today was extended to 3,000 meters in 1992. This realize Bali flight departures for larger aircraft and more international traffic. In 2000, there were 4.4 million passengers in that year. A decade later that has doubled and in 2019 it was even 25 million passengers that went through the airport. Due to the pandemic, there will be far fewer Denpasar flight departures in 2020.

In 2019 there were even more than 24 million Bali Denpasar airport departures. The plan is to reach the 38 million passengers by 2026. Most Bali departures are with the airlines Citilink, Batik Air, Garuda Indonesia, AirAsia, Lion Air, NAM Air, Sriwijaya Air and Wings Air.

Many Australians fly to Bali. There are Denpasar airport departures to most big cities like

Most of the times these arrivals are with the airlines Jetstar, Malindo Air, Qantas and Virgin Australia. There are certainly other international flight options as well. Due to the pandemic, it is significantly less but regular planes continue to depart for destinations such as Kuala Lumpur, Singapore, Taipei, Kuwait, Doha Qatar, and Istanbul.

In the Bali Denpasar departures hall there are 62 check-in desks to start the journey. There are 11 gates in connection to this international hall. The domestic terminal have 8 gates available. 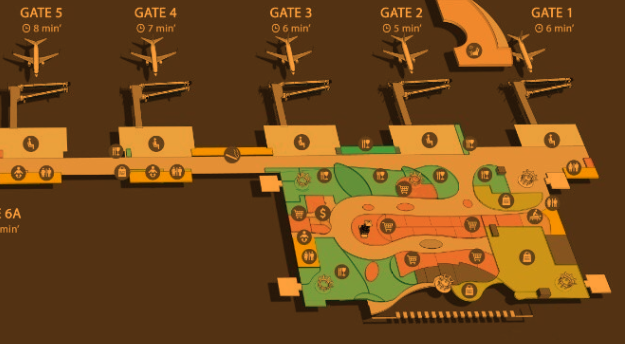 There are actually three main options for getting to or from the airport. One of them is by taxi or minivan. In the terminal you can enter your final destination and you will receive a note with destinations and price. This will take you to one of the taxis outside. The price is determined in which zone your destination falls. The destination Denpasar falls in different zones ranging in price from 180k to 250k Rp. The trip to Nusa Dua is 200k Rp.

The organization Go Jek offers a Rideshare option with the motorcycle.

There are several car rental companies at the airport. There are some well-known companies but also many local companies such as Echo Bali Rent Car and Puri Bali Car Rental etc. It is an ideal way to explore the island. You can rent a car for about USD 30-40 per day.

Travel by bus if you want to travel even cheaper. There are several options. With bus line 1 you can go to Tabana for Rp 7000. Bus line number 2 goes to Nusa Dua for Rp 3,500. The third bus line goes to Batubulan. This bus trip also costs 3,500 Rp.