Kempegowda International Airport (also called Bangalore Airport) is located to the north of the city. The renovated airport only opened in 2008 and is already one of the busiest airports in India. With its many Bangalore airport arrivals, they are even in 3rd place in India with the amount of passengers. There are many multiple airlines that operate flights within India from Bangalore International Airport. There is the state-owned Air India and the private airlines GoAir, JetLite and SpiceJet.

The airport has 2 runways of 4,000 m (12,123 ft) to keep everything running smoothly. There are 2 floors on BLR airport arrivals at the Terminal. If your journey starts at Bengaluru airport you should start at Floor 0 for the check-in desks. Then you will have to go to Floor 1 for the security check to eventually reach the gates. For the Kempegowda airport arrivals, they will have to go to baggage claim which is on Floor 1. Depending on a domestic or international flight, your baggage will be brought to one of the belts 1-7. International arrivals will be some place between 6 and 9. 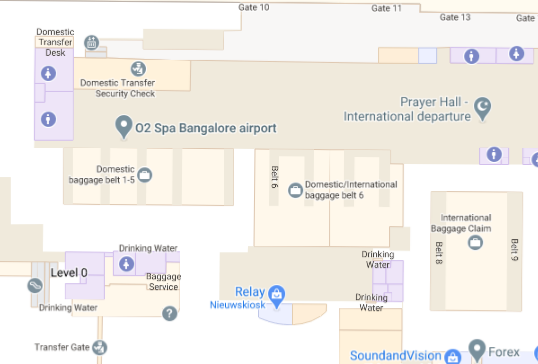 There were 230,359 aircraft movements from April 2019 to March 2020 last year. These are both Bengaluru flight arrivals. With this amount, 32,361,666 passengers were transported. That is a few percent less than the year before. In 2020, around 14 million passengers have been through the airport to travel.

Most of the flights are domestic at Kempegowda Airport. Bengalore flight arrivals mainly are processed with the airlines IndiGo, Air India, SpiceJet and GoAir. Due to the corona virus, there are not many international flights, but there are still British Airways, Qatar Airways and United Airlines. BLR flight arrivals remain important as it is often used as a hub to other smaller airports. Some of the international routes:

Several bus lines of the luxury bus company Vaya Vajra run directly from Bangalore Airport to the various places in the city. All buses are air-conditioned and have space to carry your luggage. To get to the center of the city, the area around the Shanthala Nagar district, it is best to use bus line KIAS-7A. During the day, this bus runs on average once an hour to the MG Road Metro Station, which you can reach in about 2 hours. For this route you pay a price of INR 210 per person per way.

At Bangalore Airport you can rent a car from one of the following rental companies: Akbar Travels, Carzonrent and Myles.