Hyderabad Rajiv Gandhi International Airport is located in the south of the country and also in relation to the city of Hyderabad. Its location is in Shamshabad. It has grown a lot in Rajiv Gandhi airport departures for some years and they are therefore working on expanding considerably in the future with an extra large terminal and also 1-2 runways in order to eventually grow to 60-80 million passengers per year. It is far from that yet.

There is now 1 terminal of which there is an international Hyderabad departures part and for the domestic HYD departures. You end up in the same HYD airport departures area to get to the gates. The passenger terminal is over 100,000 m2 in size. There are almost 100 check-in desks available next to the 20 self check-in. There are also many immigration counters. It is ready to be further enlarged should the need arise. However, the pandemic has slowed growth and with it expansions at the airport. 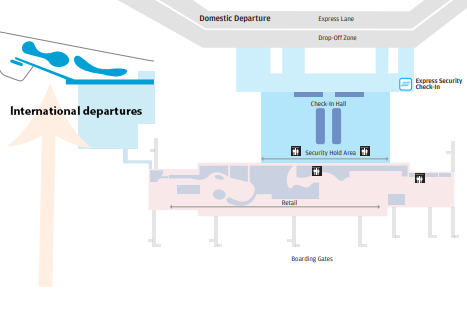 The airport has 1 main runway where all Hyderabad flight departures take place. The former taxiway has been transformed into a reserve runway. In the future there should therefore also be 1 or 2 runways for Hyderabad airport departures.

Airlines and routes with departures

The airport is widely used by the local airlines that mainly operate domestic flights. Think of Alliance Air, Spicejet, TruJet and Indigo. Of course Air India and AirAsia often fly here too.

Like many other airports in India, there are limited Hyderabad international airport departures. To Europe you have options to fly to London with British Airways, In the Asia region it is Hong Kong with Cathay Pacific en Kuala Lumpur with Malaysia Airlines. Others include: