The airport is located 24 km northeast of the center of the city of Kochi. It is one of the busiest airports in southern India. Cochin International Airport is an airport serving a number of cities in the south including Kochi on the coast. Kochi is a beautiful destination for the Indian population to go on vacation. The location of the airport is in the state of Kerala. The airport is managed by different owners. There are a couple of boxes of carriers. For some it is a hub of focus airport such as Air India, Spicejet, and IndiGo.

Most domestic flights stay in the south of the country or go to the Middle East region. With a relatively large growth from 4 million in 2010 to 10 million in 2019. The years have been difficult due to the pandemic. Under normal circumstances, there are many international flights that have been canceled or reduced in frequency. Despite the many flights, only 1 runway is used. There are several terminals to ensure that everything runs smoothly.

The history of flights at Kochi dates back to 1936. An airstrip was built on the man-made island of Willingdon. This was also used during the second world war and mainly domestic flights. It was not until the 1980s that international flights as well as more domestic routes increased. This meant that more capacity had to be created. This could only be achieved by building a new airport at a different location. The final opening was in 1999.

Phases were created for expansion in the 15-20 years after opening as the demand for flights increased. The first phase came ahead of schedule. International traffic increased faster, which meant that the terminal had to be reconfigured. More floor space was added with a separate area for domestic and international traffic. With the second phase came a new terminal especially for domestic flights. The older terminal automatically became the international terminal. P

hase 3 started in 2007. The capacity had to be increased. This was done by realizing more gates, improving the runway, increasing the parking area, and more. The last phase brought a big change. An entirely new modern terminal was built for international traffic. This is the current terminal 3. Terminal 1 was prepared for all domestic flights. Terminal 2 is only in use for private flights.

With 3 terminals there is a lot of room to grow. There is a domestic and renewed terminal 1, an executive terminal and a state of the art international terminal 3. Domestic COK airport departures are many to Mumbai, Delhi, Bangaluru and Chennai. Less frequent, but also other airports in India are served. Some of these are:

Every year around 70 thousand tons of cargo is transported via the airport. There is only 1 runway for all Cochin departures. Including freight transport, there were 66 thousand flights with 9.6 million passengers last year. There is also a helipad Kochi departures area. 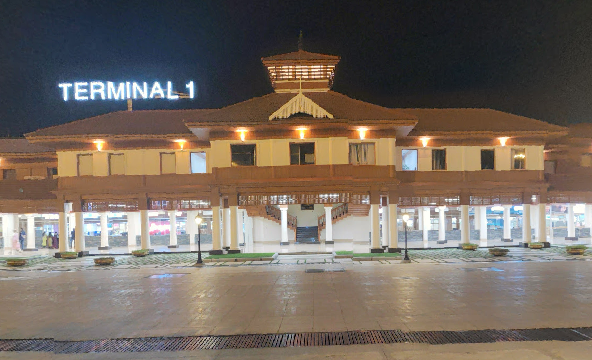