Cochin International Airport is located in the south of India on the Arabian Sea. It is the airport for people who mainly travel to Kochi, but also Ernakulam, Kakkanad and Trissur. It is located about 15 miles northeast of Kochi off the coast. It is one of the busiest airports in the south of India and largest in the state of Kerala. Most flights are actually within the state. It is also popular for the international traveler especially the Middle East region. There are 3 terminals for handling passengers and 1 for cargo. This happens on 225 thousand m2. Cochin Airport is known for the solar plant to be fully covered by power of it. There is only 1 runway or 3,400 meters.

The first flights departed from the artificial island of Willingdon in 1936. A few years later it was used as a military airport by the Indian Navy during WW2. Many years later, traffic continued to increase and international routes became more common. After a plan was approved in 1993, a piece of land was bought for the construction of a new airport. The first Cochin airport arrivals came in June 1999 with a full transition on July 1 from the old airport.

The airport was completed in phases. After the first phase, it soon became clear that the terminal had to be expanded quickly and adjustments had to be made. Phase 2 brought an extra terminal that should be used exclusively for domestic flights. This was called terminal 2. Terminal 1 became the international terminal. In this phase the cargo terminal was expanded. Phase 3 should ensure a capacity of 5 million passengers per year. More gates, parking area, and shops had to be added. There was also an asphalt layer on the runway.

The fourth phase would involve an intensive major change. The international terminal would have to be completely renovated to serve as a domestic terminal. International traffic would move to a completely new state-of-the-art terminal. A multi-storey building with 112 check-in counters and many shops for the Cochin arrivals lounges.

The airport has 4 terminals, including 3 for regular passenger transport. Terminal 1 is for the domestic Cochin arrivals and departures. The second Terminal number 2 is the smallest and is the executive terminal. Terminal 3 is used for international COK airport arrivals. The baggage reclaim area is on the ground floor. The check-in counters and immigration process are on the First Floor. The immigration for Kochi airport arrivals are also on this floor. 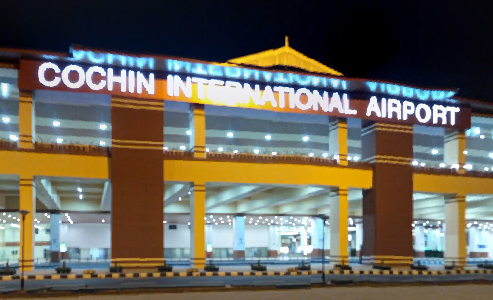 All Cochin Airport arrivals are at the 11,200 feet runway. This is the only runway available for Kochi arrivals. Until just before the corona crisis, there were 66,106 aircraft movements annually. These transported a total of 9,624,334 passengers.

It is a popular destination for all people from India. Most COK arrivals are domestic and are operated by IndiGo, GoAir, Air India, AisAsia, Vistara and SpiceJet. Some flights are operated by foreign airlines such as FlyDubai, British Airways and Ethiopian Airlines.

Most destinations flown to are domestic flights. Many Cochin arrivals come from

There are quite some regional flights from the following airports:

Some international flight options you can have at Cochin Airport: