Chhatrapati Shivaji Maharaj International Airport, Mumbai is located almost in the center of the city. All terminals are also only just a few miles away. It serves the major city of Mumbai in India. After Delhi, it is the largest airport in the country. In fact, it is in the top 50 busiest airports in the world. The many Bombay airport departures provide 45-50 million passengers per year. It is also an important airport for the transportation of cargo. Because there are only 2 runways, it is one of the busiest runways in the world. On the busiest days, more than 1000 planes a day pass through the airport. It has won several awards for best airport in the world in the past. It has a rich history with the first Mumbai flight departures in the 1930’s. Many renovations, renewals and expansions have made it a modern airport over the years.

As you can see all the top routes are domestic flights. The flights for Mumbai airport departures with passengers are in many cases with Air India, AirAsia, Alliance Air, Go First, IndiGo, SpiceJet, Star Air, TruJet, Vistara. There are many other smaller airports that can also be reached from Mumbai.

There are quite a few international flights but not many different destinations for an airport with so many passengers. This is of course also because it is a large country with many inhabitants. There are some direct flights to Europe such as to the cities Amsterdam, London, and Frankfurt. Most destinations within Europe can be reached through one of these three cities or via the well-known hubs Abu Dhabi, Doha, and Dubai International. Dubai’s other airport (SHJ – Sharjah) is not used as a hub to Europe, but it is one of the busiest routes from Mumbai. Other routes in that region with many flights are Muscat and Kuwait. Also to Asia there are not many options. The planes do go to the large well-known cities of which there are many more options. Some of them are: Bangkok and Singapore.

It is an important airport for cargo flights. There are destinations all over the world with many different airlines. These cargo flights go to Paris, Dubai, Hong Kong, Tokyo Narita, Kuala Lumpur, Singapore, Taipei, Doha, Cologne-Bonn, Guangzhou and many more.

At the moment there are two terminals for passengers active. Terminal 1 (Santacruz airport terminal) is used for domestic Chhatrapati Shivaji departures with low budget airlines. The airlines that use this terminal are IndiGo, GoAir, and Spicejet. Terminal 2 is the largest terminal which is used for both domestic and international Mumbai departures. 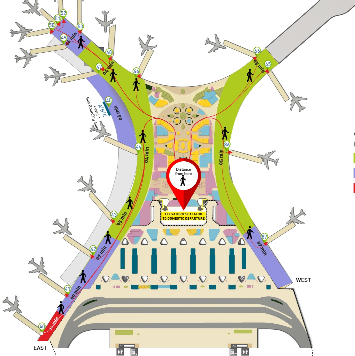 There are 2 runways to perform all flights. In 2019, there were 300 thousand Chhatrapati Shivaji airport departures to transport the nearly 46 million passengers. They processed only around 15 million passengers in 2020 and still not the amount of departures since corona in 2021.