Mumbai Chhatrapati Shivaji International Airport, formerly known as (Bombay) Sahar International Airport is the second biggest international airport of India. Millions of passengers use the airport and the Chhatrapati Shivaji Maharaj arrivals keep increasing. It is at the limit of its capacity, and is also working on expansion and modernization of terminals in the coming years. The airport is close to the center of the city of Mumbai. You can reach your destination quickly by taxi or public transport.

The first Mumbai flight arrivals started in the 1930’s. The current airport was the largest in Mumbai next to another airport called Juhu. It was put into use by the Royal Air Force during the World War. After the war it was abandoned for some time until Karachi (Pakistan) was divided. Flights quickly increased by dozens a day. The airport had to be improved quickly with all kinds of technical developments. A year later, the construction of a new terminal also started, which took 8 years to complete. The size of the planes increased and so did the quantity. Capacity was soon exceeded.

In 1980 there were already 5 million passers-by. In the meantime, the terminal could not get much bigger, so it was often overloaded. A new terminal for international traffic was built, which I completed in 1981. It was only a few decades later that the AAI again received approval to modernize the airport. Meanwhile, 15 million passengers were processed annually, the vast majority of which were domestic.

Air India has the most Mumbai arrivals with destinations within India itself. Other airlines that serve flights on the most popular routes are the following:

Most popular cities to fly to are the following:

There are many other destinations within the country possible. In total there are 50-60 different routes within India. Mumbai Airport offers international flights in addition to domestic flights. There are not many when you consider the large numbers of passengers that use the airport, but often it is to a large city so that you can travel further to your final destination. Some European options:

Options to have direct flights to far east Asian destinations:

However, most international flights go to the Middle East region. In particular, both airports in Dubai offer many options for traveling by plane. Both Dubai Sharjah and Dubai International have 6-9 aircraft per day with Mumbai airport arrivals. There are also options to the following nearby cities:

There are also some flights to Africa. Ethiopian Airlines flies to Addis Ababa Airport several times a week. You could also fly to Kenya at the destinations Nairobi and Mombasa.

There are 2 terminals used for passenger traffic and have Bombay airport arrivals. Terminal 1 is largely used for low-cost airlines operating domestic routes. There are many Chhatrapati Shivaji arrivals by IndiGo, SpiceJet and GoAir at terminal 1. Terminal 2 is a large terminal with several floors. At terminal 2 Level 4 you can check in for international flights. There are also gates at Level 3. After check-in you have to go through security check and immigration before you can go to the gate. Then there are Mumbai Airport arrivals via the available runways to destinations around the world. 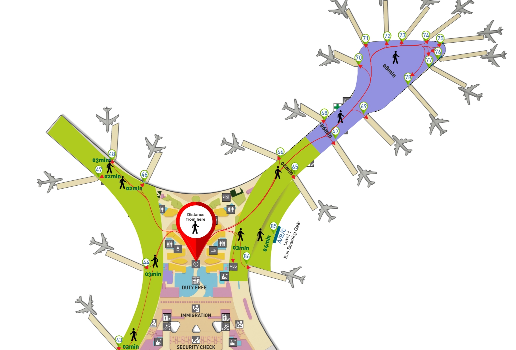 On Level 2 you usually arrive through the gate and you will be able to claim the baggage for your suitcase via immigration. After customs you can continue to your destination.

Via the 2 available runways of 9,800 and 12,000 feet, more than 300 thousand  aircraft pass annually. These are Chhatrapati Shivaji airport arrivals by plane. Last year, those thousands of aircraft carried 45,873,329 passengers.

Next to the local airlines there are international flights as well. They do this, not only Air India is popular but also with: