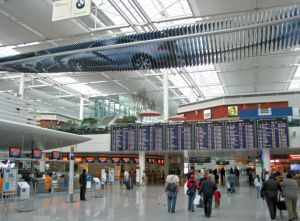 Munich Airport (German: Flughafen München), also called Franz Josef Strauss Airport named, is the second major base of Lufthansa. The airport is growing very fast and already belongs to the 30 busiest in the world with 48 million passengers a year. A lot less Munich departures in 2020 and 2021 because of the corona virus. There are two runways and two terminals. It has the capacity to land, take off and connect large aircraft from Airbus and Boeing to the terminal. There are both domestic, international, and intercontinental flights available at Munich Airport.

The first Munich departures took place in 1932. However, this was a different location than it is today. It was not until decades later that the need for a new airport arose. To do this, a village had to disappear to create space. Finally, in 1992, the new airport was put into use. The old airport (Munich-Riem) has since been closed. Since the opening, millions of people flew directly to many destinations worldwide via the new airport. In more than 10 years, the numbers grew from 15 to 30 million passengers. This made it the second largest airport in Germany after Frankfurt. A second terminal was subsequently opened to create more capacity and continue to grow. More and more airlines were added, setting a record of 48 million passengers in 2019.

Germany is a relatively large country, so many domestic flights are offered. Often as final destinations, but also as a hub to distant intercontinental destinations. If we look at the domestic routes, the routes to Hamburg and Frankfurt are by far the most popular. Hamburg is the city with the largest port in the country and Frankfurt the busiest airport. Almost all flights are offered by the airlines Eurowings and Lufthansa. There will also be a one-way flight from TUI with Munich airport as the stopover target. Sometimes there are also cargo flights on the route to and from Hamburg.

Other major German cities with multiple flights a day are Hanover, Berlin, and Dusseldorf. Less popular but still reachable some other flight routes within Germany from Munich Airport:

There are also many international destinations. Of course this includes MUC departures to London Heathrow (British Airport), Amsterdam (KLM), Paris CDG (Air France), Madrid (Iberia and Air Europa) and Rome FCO (Alitalia). It is a large airport that offers many seasonal flights but also many routes that you could fly all year round. These are often the larger cities in Europe. Some other examples are:

However, there are also many intercontinental flights to the Arab Emirates, China, United States, Tel Aviv and Tokyo Haneda. There will be a dip in 2020 due to Corona and the many Munich Airport departures are ceased on certain routes, but they will certainly remain popular in the future.

It is a modern airport which has recently become one of the best in Europe. With 2 main terminals it serves many domestic, international and intercontinental Munich flight departures.

In the last 20 years, an annual increase in passengers has been seen 18 times. Last year there were 100 thousand Munich Airport departures to transport the 12,5 million passengers.