The airport is located north of the city, about 12 km from the center and 20 minutes by car. The airport in the center of Germany is not one of the most important, but still handles more than 6 million passengers a year. It just conquers a spot in the top 10 busiest airports in the country.

The focus is on regular flight routes to big European cities combined with holiday destinations in the south. Important airlines that offer many routes are Eurowings, Corendon, TUI, and Condor for the leisure destinations. To fly to those bigger cities like Amsterdam, Paris, and Frankfurt there are options to fly with the airlines Air France, Lufthansa, and KLM.

There are four small terminals in 1 larger building. Three are for passengers and one is for the Royal Air Force. There are three runways, but only two are mainly used for passenger flights due to their length.

Before the ww2 there was an airport but compact and limited. Demand increased after the war. The city also continued to grow and with that an airport had to be built to meet that demand. A new airport was built north of the city in Langenhagen. It took a long time before the old terminal had to be replaced. In 1973 the time had come, two new terminals were opened. Growth was sought and experimented with, and that is how intercontinental flights were established. However, this did not catch on, so it remained with the European routes. A third terminal was built in the late 1990s. This completes the other two to what are still the three terminals A, B, and C.

The connection from the city to Hannover airport was usually done by taxi, private car or bus transport. At the beginning of this century a connection with the S-Bahn was made. This had to replace the airport shuttle bus to make it easier. Although there are fewer connections to Hanover Main Station, it is faster.

Most Hannover HAJ departures were holiday flights with Condor, Corendon Airlines and TUI fly. Other airlines are in many cases also low-cost airlines such as Wizz Air, Vueling, SunExpress, Eurowings or Holiday Europe who offer charter flights as well. There are also larger airlines with scheduled flights like Lufthansa, British Airways, KLM, Swiss Air Lines, and Turkish Airlines. Currently, due to the corona crisis, most Hannover departures are domestic. These are more likely fly to these destinations:

Especially Munich and Frankfurt are being used as a hub to fly to many other possible destinations within Europe but also long distance flights. In addition to the aforementioned Amsterdam and Paris, there are also many flights to major international airports such as London, Vienna, Zurich and Istanbul. If you want to book a holiday in the summer, you will have options to fly to Turkey, Greece, Egypt, or Spain via the offered flights. See one of the popular options below:

Hannover Airport is located 8 miles from the center of the city of Hannover. It is easy to drive or explore the area with a rental car from Avis, Hertz or Sixt. You drive to the city in 20 minutes. This is of course also possible by taxi and it will cost about 25 euros. Another option is to travel to the center by train. You are even there in 20 minutes. There are Hannover departures every half hour by train between 4 am and 1:30 am.

The image below indicates Hannover Airport. On the far left is Terminal A with the first 6 check-in desks for Hannover flight departures. Terminal B then also has 6 and Terminal C 8. On the right hand side is another small terminal connected by the U.K. is used for the Royal Air Force. Parking is available in several areas just before arriving at the terminal. There are an arrival level and a Hannover Airport departures level at the terminals. 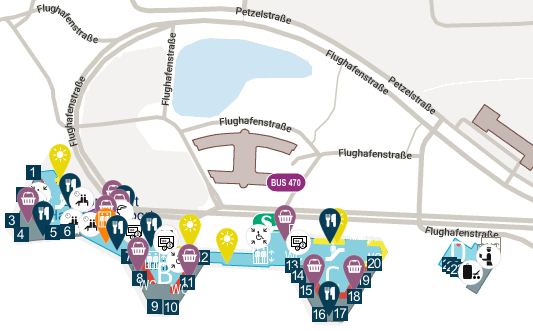 There are 3 runways at the airport for all Hannover flight departures. One of them is only suitable for smaller aircraft. The others can land larger planes. The airport is growing very steadily, with of course a big dip due to the corona in 2020. In 2019 there were still 6.3 million passengers.