Hannover airport is not one of the busiest airports in Germany, but still transports more than 6 million passengers annually. It is located in the middle of the country above the city of Hanover. Many fixed flight routes are offered as well as seasonal flights to holiday destinations with companies such as Corendon, TUI, Eurowings, Turkish Airlines and SunExpress. There are three terminal sections and also three runways. Two of them are for commercial passenger transport and freight transport. The other is considerably smaller.

The airport is located in the Langenhagen part. There the airport was built after the Second World War with an opening in 1952. It replaced an older and smaller other airport near Hanover at a different location. Due to the increase in flights and passengers, capacity had to be added. Twenty years later, two new modern terminals have been put into use. Today, these are Terminal A and Terminal B. A few years later, flights were launched to destinations on the other side of the Atlantic. Because there appeared to be little demand for these routes, these routes were stopped again. The third terminal was opened in the late 1990s. This allowed the airport to continue to grow and handle more passengers. Among other things, 11 gates were added.

Hannover Airport is located north of Hannover. The city center is 12 kilometers from the airport by car or taxi and it will take you there in 20 minutes. The taxi costs about 25 euros. There are also Hannover arrivals by bus possible. By bus you can also easily travel to and from Hanover airport. The journey takes about as long as by car. The final destination is Hannover Hauptbahnhof. 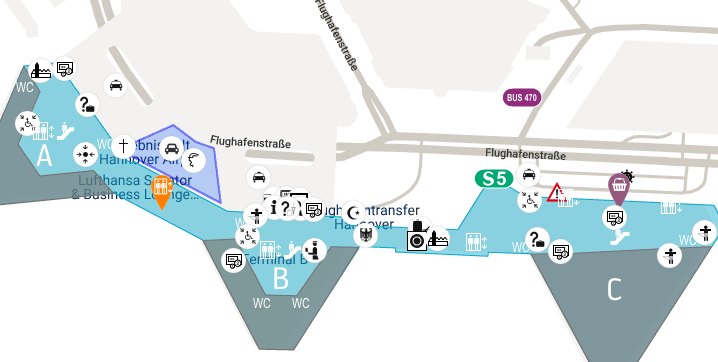 Of the four terminals A, B and C are used for passenger flights, terminal D is used by the Royal Air Force. In total there are 20 gates for HAJ arrivals. Once at the airport you will arrive on the Hannover flight arrivals floor. Departure with check-in counters are on a different floor. There are 2 runways for regular Hannover arrivals with passengers and 1 runway for smaller private aircraft. There were 6,301,366 passengers at the airport in 2019. In fact, it has been fluctuating around this amount of passengers for 20 years. In 2020 there have been a big decrease of Hannover airport flights that only 1,5 million passengers used the airport.

When seeing where all those Hannover arrivals then most come from:

There are many more options in Europe. Some that are also offered all year round but others only in certain seasons or even as charter flights only. Here are some more examples:

There will be also cargo Hannover flights arrivals at the airport. This will be often by FedEx Express from Billund, Liege and CDG-Paris.