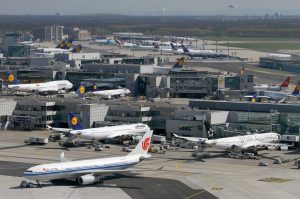 Frankfurt Airport (IATA abbreviation FRA), is the most important airport in Germany and one of the 10 largest airports in the world.The airport is the main hub for Lufthansa. A large proportion of passengers at Frankfurt airport is also a transfer passenger therefor. The airport is located southwest of the city of Frankfurt. It is about 7 miles (12 km) from the center. You can easily get to and from Frankfurt Airport by train or bus. A rental car or taxi is of course also an option. The taxi costs about 35 euros.

Terminals at the airport

Frankfurt Airport consists of two contiguous terminals. To save time you can make the distances with the Skyline, a shuttle train.Terminal 2 is the smaller part compared to Terminal 1. It has a capacity of 15 million passengers per year. Most FRA departures belong to all airlines that are not from the Star Alliance or Lufthansa group. With some exceptions. There are a total of 42 gates available in terminal 2. Terminal 1 is the largest and main terminal. Most Frankfurt airport departures are from Lufthansa. The terminal is divided into several parts to accommodate 50 million passengers annually. On the ground floor is the arrival area with the baggage claim. Underground is the train station and there are parking spaces. At the upper floor, the Frankfurt departures start with the check-in counters. 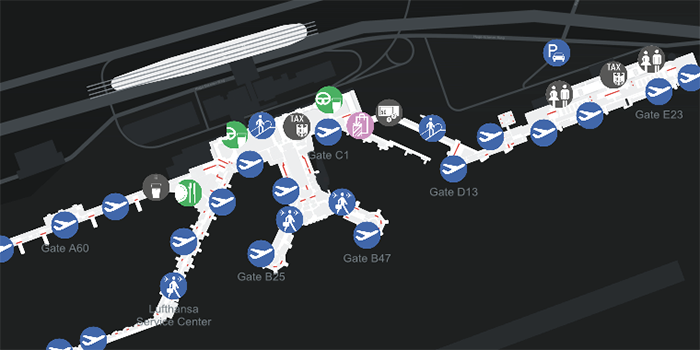 Last year in 2019, there were more than 70 million passengers at the airport. This happened with 513,912 FRA departures on 4 different runways. In order to grow even further as an airport, a third terminal is being built.

In addition to Lufthansa, there are also many flights from Condor, Eurowings, TUI fly and Ryanair. As it is one of the largest airports in Europe, there are also many flights to intercontinental destinations. Some of those airlines that serve those routes are Vietnam Airlines, United Airlines, Turkish Airlines, Swiss Air Lines, South African Airways, Singapore Airlines, Scandinavian Airlines, Qatar Airways, LATAM, Korean Air, KLM, Japan Airlines, Icelandair, Iberia, Etihad Airways, Emirates, Delta Air Lines, Croatia Airlines, China Eastern and Southern, Cathay Pacific, British Airways Air China and many more.

Next to the top 5 destinations there are many more routes at this busy airport in Frankfurt. Some other domestic Frankfurt departures head to Düsseldorf and Stuttgart. Most of these flights will be with the operating airline Lufthansa.

When flying an European route there are endless possibilities. Millions of passengers also head to Paris–Charles de Gaulle, Barcelona and Amsterdam Schiphol Airport.

The airport gives also options to fly to the bigger cities in the rest of the world. Dubai International is the most imortant route flying from the German airport. Other Frankfurt airport departures with intercontinental routes are going to New York JFK, Shanghai-Pudong, Seoul Incheon, Toronto-Pearson, Bangkok-Suvarnabhumi, Chicago OHare, Beijing Capital, San Francisco Airport and Singapore Airport.