The Cibao International Airport  is also known as Santiago airport. It is one of the three most important airports in the Dominican Republic by several passengers. It is located in the Cibao region, which is the most prosperous in the country. It is a modern airport serving Cibao arrivals for the residents of this region but also tourists.

The construction of the Cibao international airport began in February 2000 and was inaugurated in 2002 with the first commercial Cibao flight arrivals. It operated with two direct flights to San Juan by the United States airline American Airlines. By May 2002, the Dominican airline Aeromar made its first direct STI arrivals from New York, United States.

It currently serves domestic and international STI airport arrivals. It is in the city of Santiago de los Caballeros, which is the second-largest city in the country. This airport serves Dominicans residing in the United States, Caicos, Puerto Rico, and the Turks Islands.

You can find vehicles from the Cibao International Airport for one or more than seven people. The Taxi AIC company provides them, and the travel time is approximately 30 minutes. 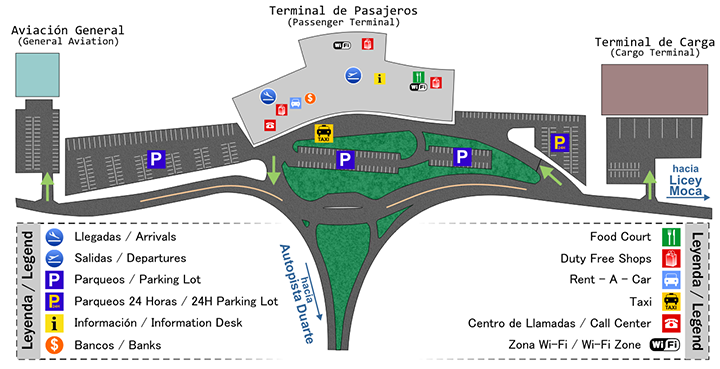 The rates are fixed, but it depends on the destination and the number of passengers. You can also rent a car after your Cibao Airport arrivals so that you can move more comfortably and freely around the city. You can find the leading car rental companies; you have to go to the office designated for this service.

The Cibao International Airport or Santiago Airport has a single runway 11/19 that is 2,620 meters long for all STI arrivals. It can support all types of aircraft, except the new Airbus A380. There are proposals to expand the runway and allow planes like the Boeing 747 to land for long-range flights to have Cibao arrivals as well.

This is one of the most modern runways in the Dominican Republic and is equipped with an Instrument Landing System or ISL, for both runway directions.

The international terminal is the most used and is used for most of the flights scheduled at this airport. Its infrastructure is modern and state-of-the-art, making the check-in processes faster and more efficient and the boarding and loading of luggage.

There are some other destinations to fly to as well. These are mainly seasonal destinations or are temporarily ceased because of the pandemic:

The Cibao International Airport or Santiago Airport for 2006 received about 15,700 flights and more than 987,000 passengers. For 2007, the airport had a growth in Cibao Airport arrivals to 460,000 more passengers than the previous year. In 2008, it served 994,883 passengers going to destinations such as San Juan, New York, and Boston.

By 2012, the Cibao international airport exceeded a million passengers and positioned it as one of the most important airports in the country. It has a significant flow of passengers for the Dominican Republic. In 2019 it increased the STI arrivals to even to 1.8 million passengers. Since there have been a pandemic the numbers decreased. In 2020 there were just under a million travelers at the airport. Luckily numbers are increasing again in 2021 with about 20 flights a day to the US.