Paphos airport is located southeast of the city. The A6 motorway is close to the airport, this road will take you to Limassol. The airport consists of a modern terminal that came into use in November 2008.

From the airport you can reach the center of Paphos in 20 minutes (14 km) and the center of Limassol in 45 minutes (60 km). The capital of the island of Cyprus can be reached by car in 1 hour and 30 minutes (140 kilometers).

Paphos Airport arrivals have continued to increase significantly in recent years. Since then, visitor numbers have increased. It was a result of Ryanair, which therefore started to offer more routes. The terminal has a couple of boxes of check-in desks. There are a total of 7 boarding or exit gates and some restaurants and shops. Unfortunately, we will see a huge drop in Paphos flight arrivals due to the corona. 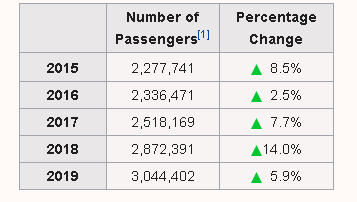 Most Paphos arrivals are with the carriers Jet2, Ryanair, TUI and Easyjet. Other carriers that regularly appear at the airport are:

Many of these flights go all over Europe but also even further such as Tel Aviv and some Russian cities.

Some other important Paphos Airport arrivals during summer you could flying from: