HAV departures today and tomorrow

Havana Airport (IATA: HAV) is also known as José Martí International Airport or Rancho Boyeros Airport. The location is in the municipality of Boyeros in Cuba and is named in honor of the poet and national patriot José Martí. There are 4 terminals and 1 runway of 13,100 ft. Many flights come from the US by different airlines. It has become a popular holiday destination. Other airports in Cuba such as Varadero and Holguin are good alternatives but with fewer flights.

There is another nearby airport of Havana. This is Managua Airport which is a military airport based 11 miles south of the city.

The José Martí International Airport or Havana Airport is the main base for the Cubana that offer most Havana departures. In 1930 this airport replaced the Columbia airfield, the first airport to operate in Havana to have its first Havana flight departures at this new terminal.

It is operated with the company ECASA and serves international and national HAV airport departures in that country. It connects Cuba with the rest of the Caribbean, Central America, North America, South America, Europe, Africa, and Asia.

It is an airport that can handle about 3 million passengers a year and the José Martí Airport departures keep increasing slowly. It is modern, very similar to other airports on the continent. In the 1960’s, the Rancho Boyeros airport was bombed by B-26 planes belonging to Brigade 2506 (a group of Cuban exiles sponsored by the CIA) trying to overthrow Fidel Castro.

The Havana airport is 20 km (12 miles) southwest of downtown Havana. It is located in the municipality of Boyeros, Cuba. 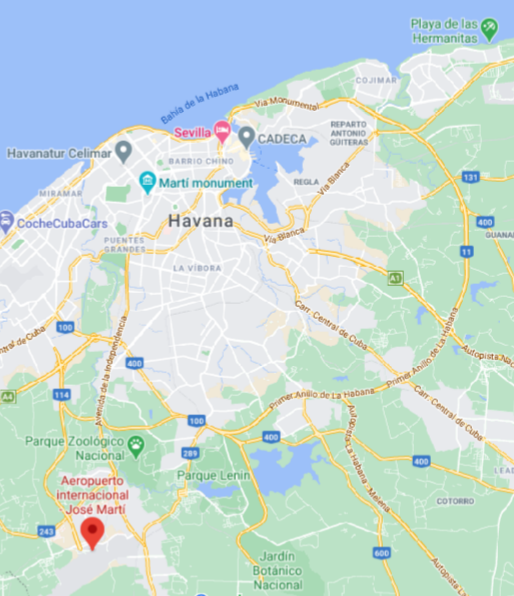 You will able to use public transportation to get to the airport and have José Martí fligth departures.

When you arrive at the airport you can take a taxi that will take you to the center of Havana; the trip takes between 20 and 30 minutes.

Havana airport departures by rental car is the most logical option. A car rental service is also available. It is a freer way to get to know the city. You have to look for the car rental office at the Havana airport and choose the car of your choice.

The Havana airport only has one runway for HAV departures that has 14 thousand feet in length.

The airlines that frequently use the José Martí International Airport or Havana Airport are:

Frequent destinations with Havana airport departures are the following:

In 2021, the Havana Airport or José Martí International Airport was able to handle more than 13 million passengers.