Havana Airport or José Martí International Airport is also known as Rancho Boyeros Airport. It is named after the patriot and national poet José Martí, who, for many Cubans, is a national hero. It is the main base of the Aerogaviota and Cubana airlines, serving international and domestic Havana arrivals. This airport is located in the municipality of Boyeros, in the capital Havana, Cuba.

Top routes from HAV

There are many more airplane routes during different seasons. There are more charter flights from Europe. Also VivaAerobús offers Havana arrivals from different cities in Mexico during summer season.

The José Martí International Airport is operated by the Cuban company ECASA who is responsible for the Havana flight arrivals. It is the main national and international gateway to Cuba. Every year it serves millions of passengers who travel to this country and have HAV airport arrivals. It connects Havana with the rest of the Caribbean, South America, Central America, North America, Europe, and some destinations in Africa and Asia. All planes in Cuba belong to the military or state airlines; private Cubans cannot have planes to process commercial José Martí Airport arrivals.

In 1960, this airport was bombed by B-26 planes belonging to Brigade 2506, a group of Cuban exiles sponsored by the CIA, trying to overthrow Fidel Castro. State or foreign aircraft are the only ones that can use the José Martí International Airport facilities. 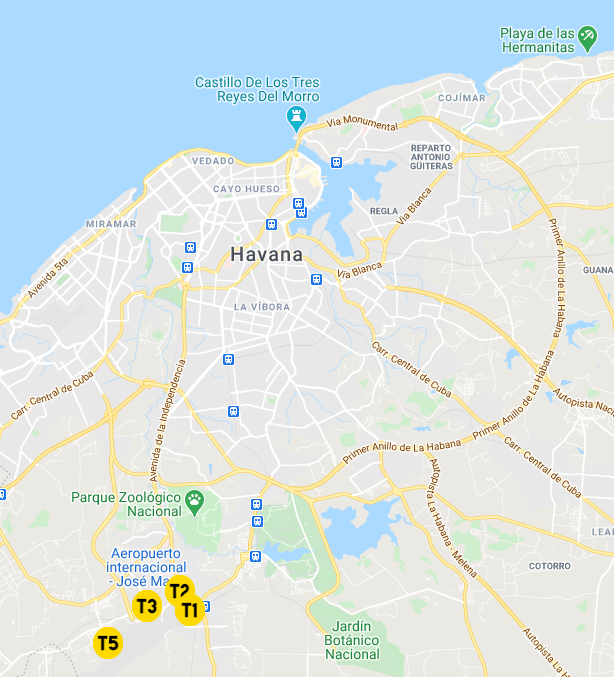 The Havana airport has a single runway for Havana arrivals that is 13,123 ft. Medium and large aircraft such as Airbus A380 and Boeing 747 can land on this runway.

Terminal 1 is the oldest and is located at the other side of the runway. Terminals T2 and T3 are near each other. If you can go to the terminal 3 to terminal 1 it’s best to take a taxi. It is not advisable to walk after your José Martí Airport arrivals if you are at the wrong terminal. Terminal 3 is the largest and most modern and has two floors, the ground floor is for Havana José Martí arrivals, and the top floor is for departure.

There is actually a fourth terminal called terminal 5. It was in use by a couple local airlines which are not operational anymore.

The main airlines that use this airport are:

Among the main destinations that you can fly to Cuba with HAV arrivals are:

The José Martí International Airport or Havana Airport in 2021 handled about 13,133,626 passengers.