Singapore airport is one of the busiest airports in the region. It is often already used as a hub to fly to other destinations. Singapore Airlines is largely responsible for this. It is also an important point for freight transport. According to Skytrax, it is also the best airport in the world. It is also known for the good transits and how clean the airport is. The name Changi is due to the location of the airport. It is located in the Changi district. In addition to Singapore Airlines, the carrier Jetstar Asia Airways is also largely represented. Before the pandemic, the airport served nearly 70 million passengers a year, making it one of the top 20 busiest airports in the world. All flights arrive and depart via 3 runways, each 13,100 feet long.

The first flights were already realized in 1959. The then airport was then called Paya Lebar. The first passenger flight was from Qantas with a Boeing 707. The number of international arrivals and departures increased rapidly. The Concorde also made Singapore arrivals from 1972. A few years later, the question arose to expand or to relocate the airport in connection with space. It was moved and the work started not much later in Changi.

The first departures in Singapore Changi were realized in the early 1980’s. Work on the second terminal started in 1986. Since the new airport, it has also won many awards to this day, such as best airport in the world. The second terminal was finally opened in 1991. The facilities were continuously expanded with a swimming pool, sports area and movie theater.

In 2002 an MRT station was opened. This created a fast connection with the city of Singapore. The largest passenger aircraft Airbus A380 was also welcomed in 2007. Terminal 3 was opened a year later, including a Butterfly Garden. The airport continues to expand and develop as Jewel Changie Airport. The fourth terminal was opened not so long ago in 2017. In 2019, the Jewel Changi Airport will finally be open in April, which gives a fantastic experience.

The location of Changi Airport to the east of the city center about 13 miles away. You can have Singapore international airport arrivals by car which is quickly 30-40 minutes before you are there traveling from the center. 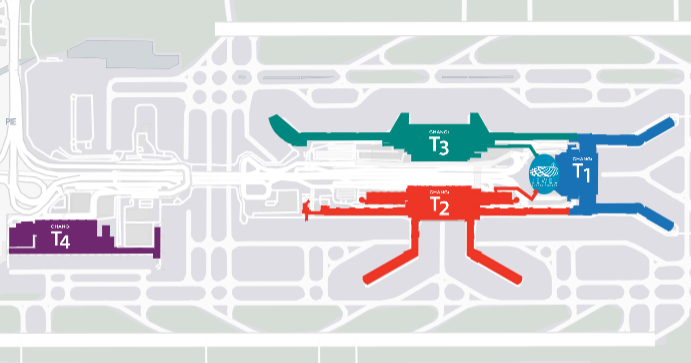 Singapore Changi arrivals are spread over 4 terminals. Terminals T1, T2 and T3 are connected by a skytrain. This is a free service to get to the other terminals. To get to T4 you have to travel a bit from T2 by bus. There is also a building called The Jewel just before T1. It is a fascinating place with not only restaurants and shops. It has the largest indoor waterfall in the world which you can enjoy before your Changi flight departures. There is also a hotel, a canopy park on the top floor, mirror maze, discovery slides and much more. There is also a beautiful forest valley through the whole building.

All Singapore Changi airport departures go from one of 3 equal length runways of 13,100 feet each.

The airport is widely used for cargo flights, ranking it at the top with over 2 million tonnes of cargo annually. Important industries for this are China, India, U.S., Australia and Hong Kong. Many airlines are responsible for these Singapore airport departures, including the airline Singapore Airlines Cargo.

Singapore Changi Airport is actually growing fast for 40 years. Where 7 million passengers used the airport in 1980, this is now against 70 million. These are 382,000 SIN airport arrivals and departures.

Singapore Airlines and low-cost airlines Scoot, Jetstar Asia and SilkAir have a large market share with most Singapore international arrivals. Where Singapore Airlines flies all over the world, the other airlines mentioned mainly keep it in the region. Many flights go to Bangkok or other hubs. Singapore Airlines has many SIN airport departures to Asia, Oceania and Europe. Other major airlines that fly to Singapore Changi Airport are:

There are direct flights to destinations all over the world. Many of these flights are passenger flights, but also many cargo flights. Many Singapore Changi departures are to China such as Beijing, Chendu, Kunming, Shanghai. Other busy routes to major international airports that often serve as hubs are the following: