Vancouver International Airport is located in the west of Canada. The airport is located 8 miles from the center of the city. It is often referred to as a hub to China as it has one of the most YVR departures to the Asian country. It’s a popular airport in the country and with the many YVR airport departures it has grown to the second largest airport in Canada. It is most of the time in use by the carriers WestJet and Air Canada but also Air Transat. It is an airport that wins many awards. In the last 10 years it has already won the ‘best North American airport’ but also high in the rankings worldwide.

The first Vancouver flight departures started on a grass airstrip on Lulu island. In 1929, the city of Vancouver bought some land to run Vancouver departures from Sea Island. The terminal and runways have expanded and improved over the years to become a major airport.

Its history goes back to 1931. That is the year the airport opened and transported just over 1000 passengers. That has grown to 25 million passengers annually at Vancouver Airport. It all started with a small runway. There was also a small wooden building that served as a terminal. During the war it was used by the Air Force and like many airports during the 60’s and 70’s it grew rapidly with the jet planes. Even in the year 2010 with the winter Olympics it brought many athletes via the airport to Vancouver and the surrounding area.

There are three different terminals at the airport for YVR airport departures. These terminals are called South Terminal, International Terminal and Domestic terminal. The latter two are interconnected and refer to as the set top terminal. In the main terminal there is a section for US Border Pre-clearance. The domestic terminal has been available for Vancouver flight departures since 1968. From here there are several piers or concourses named Pier A, B and C. 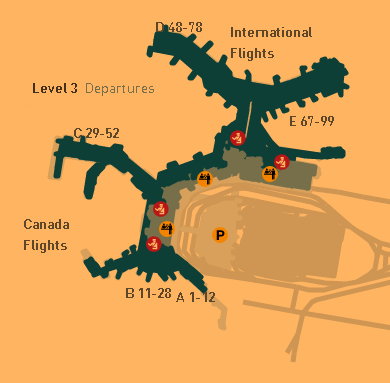 The international terminal has been offering flights since 1996 with Pier D and E.

Then you have Terminal South which provides regional flights. There is also a floatplane facility for aircraft to take off from the water.

Most Vancouver flight departures are in operation by WestJet and Air Canada to destinations in Canada itself, but also to the US and beyond to Europe, Asia and Latin America. There are airlines that have regular flights or seasonal flights. These include:

The most important and busiest destinations, especially during the pandemic, are domestic flights to Montreal, Toronto-Pearson, Calgary and Edmonton. If international traffic increases in 2021, the following destinations will also be important again:

They hope to have many Vancouver airport departures again as soon as possible in order to be able to return to the 30 million passengers in the year.