Montréal – Trudeau International Airport is located 12 miles south of the city of Montréal. It is the third busiest airport in Canada. There were 236,908 YUL airport arrivals in 2019. There have been a drop in passengers last years since the pandemic.

The airport is also called ‘Aéroport International Montréal-Trudeau’ in French. It is also sometimes called Montréal–Dorval Airport because of its location in Dorval, Quebec. The airport serves people from Montreal and the surrounding area, regions in Quebec and eastern Ontario. Although it is located in Canada, it can also be useful for passengers traveling to the US as it is close to the border. The airport is named after the former Prime Minister Pierre Ellitt Trudeau. The Montreal Mirabel is largely responsible for the cargo transport, while Aeroports de Montreal (ADM) takes care of the operational tasks for passenger transport.

It is the busiest airport in Quebec and comes in third place in the country of Canada. Most airline routes remain in Canada itself or head south with destinations in the US. In addition, there are also planes to Europe, South America, Caribbean, Europe, and Asia. The largest airline at the airport is Air Canada. Other carriers based at Montreal Trudeau airport are Air Transat and Air Inuit.

The first flights to Montreal took place in 1927. That was at Saint Hubert airport. Because the demand for flights increased, a new airport had to be built. A piece of land was bought by the government at the Dorval Race Track. The new airport was opened in 1941 with the first Montreal airport arrivals with 3 additional runways. After a few years, more than 200,000 passengers used it every year. It soon reached the first million after ten years of opening.

Fifteen years after opening, a new terminal was put into use. This immediately became Canada’s largest terminal. The innovations led to it becoming Canada’s gateway from Europe. Its continuous growth was expanded, but it would be expected that it would soon reach the new maximum capacity. As a result, another airport was designed and built: Montreal Mirabel International Airport. There was a transition in which the flights to and from the US were still carried out but the rest transferred to the new airport in 1975. Montreal Mirabel airport became the largest airport in the world and more international airlines came with more routes.

Due to the Montreal’s economic decline and the larger aircraft from Europe, airline routes to Toronto Pearson airport changed. This also ensured that all flights went back from Maribel to Dorval Airport in 1987. Since 2004, Dorval airport has been called Montreal Pierre Elliot Trudeau International Airport.

The airport is quite close to the city center and is easy to reach. It is in the southern area near Dorval.

Rent a car after arrival. There are several car rental companies such as National, Dollar, Enterprise, Avis and Hertz to help you out with a rental car. They have counters in the terminal to arrange a car for you.

If you want to continue traveling by taxi after arrival, you can arrange a taxi at the arrivals level. If you want to travel downtown there is a fixed price of $41. All other routes are calculated by meters.

If you want to pick up or drop off passengers from the airport yourself, you can do that at the special drop-off or pickup locations. You are not allowed to park here for any length of time. You could also use the free CellPark waiting lot for the pick location. 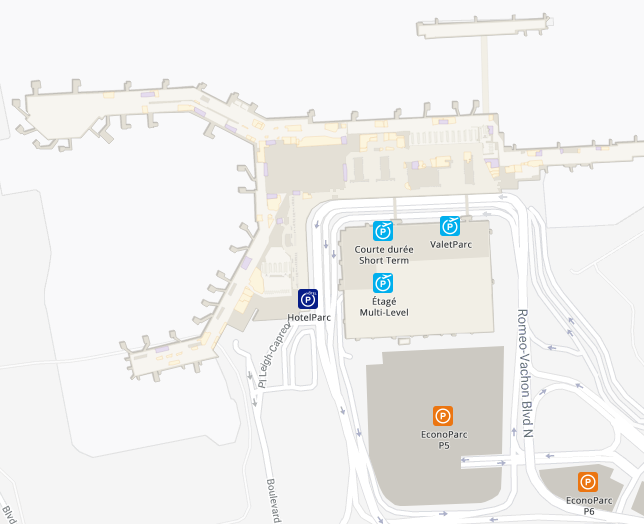 The terminal consists of two floors. Upstairs are the Check-in desks to access the gates via the security check. These gates are also divided into 3 parts, for domestic flights, U.S. flights and other international flights. Upon Montréal flight arrivals you will land on one of three runways (11,000, 9,600 and 7,000 feet long). When you arrive you will have to go down one floor in front of the baggage claim area where you will end up in the Montréal arrivals hall. 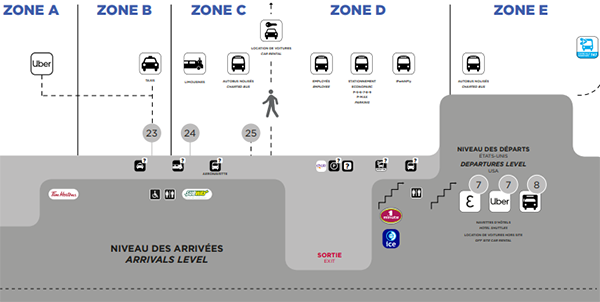 Montreal-Trudeau Airport is actually continuously expanding the airport and offering more capacity. This is also necessary because the Montréal–Trudeau airport arrivals have been increasing rapidly in the last 10 years. They went from 12 million passengers to 20,305,106 in 2019. Of these, there are slightly more international flights than domestic flights.

Many of the domestic Montréal–Trudeau flight arrivals are operated by Air Canada, WestJet, PAL Airlines and Porter Airlines. Flying to the USA you often do with United Express, Delta Air Lines, American Eagle and Air Transit. Mexico is also important to the airport. There are many Montréal–Trudeau arrivals from Aeroméxico and Sunwing Airlines. Some of these destinations are the following:

There are many more flights to the US, Caribbean but also Europe. Some of the busy escape routes are as follows: