Calgary International Airport (YYC) is the main airport in the Canadian state of Alberta. The location is 12 miles north of the city center. The area is about 5,000 acres. One this piece of land they created 2 passenger terminals, for domestic and international flights. There are 4 runways with different lengths.

YCC handles nearly 18 million Calgary departures (passengers) annually, making it Canada’s fourth-largest airport for passenger traffic. Calgary Airport has the longest runway in Canada of 14,000 feet to process Calgary flight departures. The length of the runway has to do with the height of the airport. Due to the lower air pressure, aircraft must approach at a higher approach speed.

Carriers that have an important share at the airport are WestJet and Air Canada. They use the airport as a headquarters or hub. Since Canada is a large country, Calgary departures are widely used. There are many flights to smaller airports in the region.

There are 2 terminals that are interconnected. The first part is for domestic flights (A, B, C) and the second part for YYC departures to the U.S. (E) and Calgary Airport departures to other international (D) destinations. 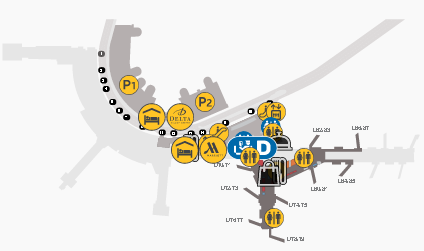 Most flights have YYC Calgary departures to:

In most cases this happens with Air Canada and WestJet. Some other popular domestic flight routes:

There are also many international flights starting at Calgary airport. Air Canada and WestJet offer most of these. Destinations are going to the Caribbean, US and Europe. Other airlines you frequently would see are Alaska Airlines, Delta Airlines, United Airlines.

Flights to Europe often go to the big airports like:

Most international flight routes are actually to the USA. Not just to the big cities but also smaller ones: