Calgary International Airport is the main airport serving Alberta, Canada. Nearly 6 million passengers used the airport in 2021. This makes it a fairly small airport. It is the home of WestJet, and a major base of Air Canada. Canadian Air Transat flies between the two cities in high season.

The Calgary Airport Terminal consists of 2 terminals with 5 piers perpendicular to them, called Concourse A to Concourse E. All piers are a short walk from each other. The international terminal is quite new and opened in 2016.

Calgary International Airport is half an hour from the city by car / taxi. It takes 10-20 minutes longer by bus.

There are 2 terminals adjacent to each other. There are domestic Calgary arrivals on parts A, B and C, international on D and for YYC Calgary arrivals  from the U.S. at part E. These are on the second floor. On the first floor is the Calgary airport arrivals hall with baggage reclaim area. There are 4 runways, 2 of which are quite long (12,675 and 14,000 feet). This is because there is a lower air pressure in Calgary. As a result, there is a higher speed that an aircraft must have to land / take off. 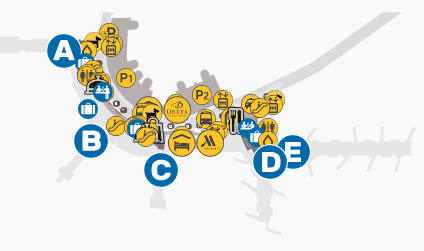 There are 250 thousand Calgary Airport arrivals to transport the 18 million passengers. Most YYC arrivals come from Vancouver and Toronto-Pearson and Edmonton. These flights are mainly operated by the airlines Westjet and Air Canada. Other international airlines that often have Calgary flight arrivals at YYC are Virgin Atlantic, Delta Air, KLM, United Airlines.

Most international flights depart to the US. However, there are also some routes to Europe. You can fly to London, Amsterdam or Frankfurt in a direct flight. Options other than the US are in the Caribbean or Latin America. Some examples are:

Destinations across the US are widely spread across the country. Some busy airplane routes are as follows:

You can easily take the taxi outside the terminal. The taxi is a pleasant and safe way to travel to or from Calgary International Airport.

Another option is to take the bus. You can take several buses to downtown Calgary. From international terminal door 15 on Calgary Airport Arrivals level, on the other side of the road is Pillar 32, where you can buy tickets. If you have a domestic flight and arrive at the domestic terminal: At exit 2 on arrivals, Pillar 7 is located on the other side of the road. Here are ticket machines for the buses. Some shops like 7-Eleven and The Sandstone pharmacy also sells bus tickets. A one-way ticket costs around $3.50.

Then there are 2 different routes: