Charleroi Airport, also known as Brussels South Charleroi Airport is and the largest regional airport in the south of Belgium. It’s an important base for several low-budget airlines like Ryanair and Wizz Air. There were in 2019 more than 8.2 million passengers (less than a million in 2001) that traveled through the airport. Brussels South Charleroi Airport (BSCA) is growing for the past 20 years. Charleroi airport arrivals continue to rise, although it will get a big dip due to the corona in 2020 and 2021. The CRL airport arrivals went down and only 2,6 million passengers used the airport in 2020.

Although the airport is close to Charleroi, it is also considered the second airport of Brussels. There are good connections to the Belgian capital for tourists or business people. The other airport in Brussels is Brussels Airport.

The terminal dates for the most part of 2008, and is fully equipped. According to Skytrax’s Brussels South Charleroi Airport the second best low-cost airport in Europe.

The history of Charleroi Airport goes back to 1919 when a flying school was started in Gosselies. After the Second World War it became a public airport. The airport’s growth only really started in this century. The airline Ryanair decided to use Brussels South Charleroi Airport as a hub after it had already set up a connection with Dublin a few years earlier. Many flights to other European countries were immediately offered, which turned out to be a success. Within a few years there was an increase from a few hundred thousand to 2 million passengers per year.

Other airlines such as Jet4you and Private Wings also started connections, including Casablanca. Due to the rapid growth, capacity had to be increased and a new terminal was opened in 2008. The runway was also upgraded with the ILS CAT III system. The destinations quickly doubled with airlines such as Air Arabia and TUI fly. The airline Pegasus also came to Brussels South Charleroi Airport because it provided opportunities to further destinations in Asia. Due to the growth, a second terminal was even added, bringing it to 8 million passengers per year. By allowing larger aircraft to land from distant destinations, the runway was extended from 2,500 to 3,200 meters.

If you pick someone up by car for a Brussels South arrivals you can go to P1 express to park for a short moment. They will charge 2 euro for 30 minutes. If you want to park the car for a longer period, there are more options. Premium+ Lock is closest. This parking garage is covered and well secured. In addition, you also have Premium P1 and Comfort P2 which are a few minutes’ walk away. If you want to park for a longer period, Low Cost P3-P4 is a good option that is a lot cheaper. 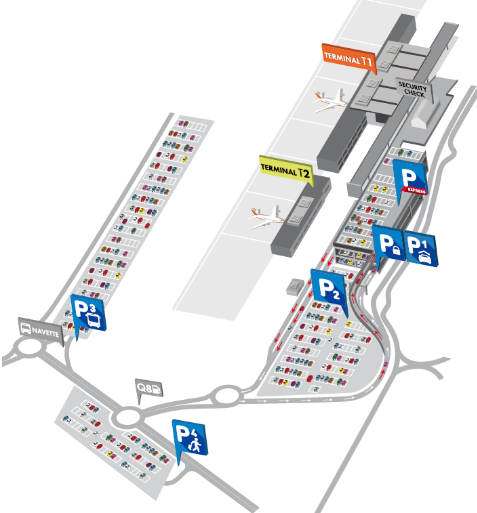 Travel by shuttle: with the company Flibco you can book tickets to or from the airport with destinations throughout Belgium. Travel to Brussels city in 45 minutes, Antwerp in 60 minutes, Paris/Cologne or Amsterdam in 2-3 hours.

Traveling by taxi is a good way to continue traveling to your final destination after arrival. There are several companies available that are also available outside the terminal. If you prefer to drive yourself, you can also decide to rent a car. Well-known car rental companies such as Europcar, Hertz, Avis etc. are present in the terminal with counters.

The cheapest option to travel further is by public transport. Take Bus A to Charleroi Sud train station. You can buy a combination ticket via NMBS that includes the bus ride and further journey by train.

Many Belgians, France and Dutch know Charleroi Airport because of the cheaper flights to more than 80 European destinations. Apart from Ryanair, there are often Charleroi airport arrivals by Jetairfly, TUI fly and Wizz Air.

Most travelers will have Charleroi arrivals from the east and south of Europe:

Other Charleroi flight arrivals are coming from: