This is the main airport of the country Belgium. It is the busiest and largest airport in the country. Without further ado, around 26 million passengers use Brussels Airport. It is located in the municipality of Zaventem, north of the capital Brussels. The owners include the Belgian State, a pension plan, and the Maxquarie Group. Most flights are operated by TUI fly and Brussels Airlines via one of the three runways. Use is made of 1 terminal that spreads out in Pier A and B for all available gates to board.

Some top routes from BRU

The history of the airport goes back to the Second World War. The Germans reserved a piece of land just above Brussels to realize an airport with the name Fliegerhorst Melsbroek. Three runways were created, one of which is still in use. In 1944 it came into the hands of the British. After the war, it was decided that this airport would also become the national airport, since the original one in Haren would be too small. A few years later, a new terminal was built and the long runways were extended. In the years that followed, many more facilities and buildings were added. In 1955 there was also a direct line with the train from the center of Brussels. A year later, a third runway was created.

In 1956 it was decided by the government to move the terminals and other facilities from Melsbroek to Zaventem, leaving the asphalted runways intact. The transition was completed two years later. Thanks to this relocation, the airport has been given the name Zaventem in the title.

In the decades that followed, commercial flights grew enormously. Expansions continued over the years with a new cargo terminal being completed in 1976. Finally, a totally new terminal was built in 1994 that took over the old one. For years it was one of the best airports in the world. During this time, the flights did decrease because the airline Sabena slowly ran into problems. It went bankrupt a few years later. In 2002 the numbers of passengers only increased again from 14 million to eventually more than 26 million in 2019.

Brussels Airport is located in Zaventem, near the city of Brussels in Belgium. In 20-30 minutes you are at the airport by taxi for about 45 euros. Another option is by train. There are every hour Zaventem Airport arrivals by train. This may be faster and cheaper than the taxi, depending on your destination. There are also buses on this route which is a similar price to the train but a bit slower. Once arrived at the airport, there is 1 large multi-storey terminal building. Brussels Airport arrivals by train arrive at level -1 and by bus at level 0 and taxi at level 2. All BRU arrivals by plane will also be able to collect their luggage at level 2 in the terminal. Level 3 is the departure area. 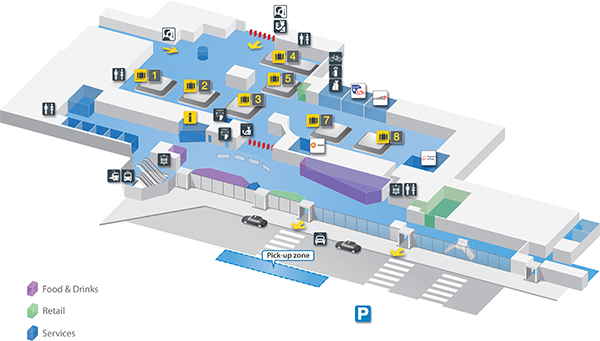 It is home to Brussels Airlines, which offers many flights within and outside Europe. The holiday company TUI Fly also offers many Brussels flight arrivals (also many seasonal flights). From a European point of view, the southern cities are important for the Belgium airport. With London Heathrow as the stranger but a great option for a city or business trip.

The main intercontinental Brussels arrivals are from:

Many American destinations that are flown by Air Canada, Delta Air Lines and United Airlines in addition to Brussels Airlines.

Other popular BRU airport arrivals within Europe are also handled by the following carriers: