Baku Heydar Aliyev International Airport is located 13 miles northeast of Buka city. It is one of the 7 international airports in the country. However, this is the most important with a lot of international traffic. It owes its current name to a former president since 2004. Before that, it was called Bina Airport. There is an easy way to get to the airport via a new modern highway. There are several shops and restaurants in the terminal. Most flights are offered by Azerbaijan Airlines. For the pandemic it processed 4.7 million passengers a year. There are Baku Airport arrivals on two available runways.

There are 3 different terminals. Two are for passengers and one for cargo. Terminal 1 is the newest terminal built and opened in 2010. It is a modern terminal that has the capacity to handle the largest passenger aircraft. The maximum capacity for passengers is 6 million per year. Terminal is largely used for domestic flights and international low cost airlines arriving from the north.

When you arrive at the terminal when walking out of the plane, it will usually be at Level 2. From here you also have to go through the passport control and then go to Level 1 for the baggage claim. 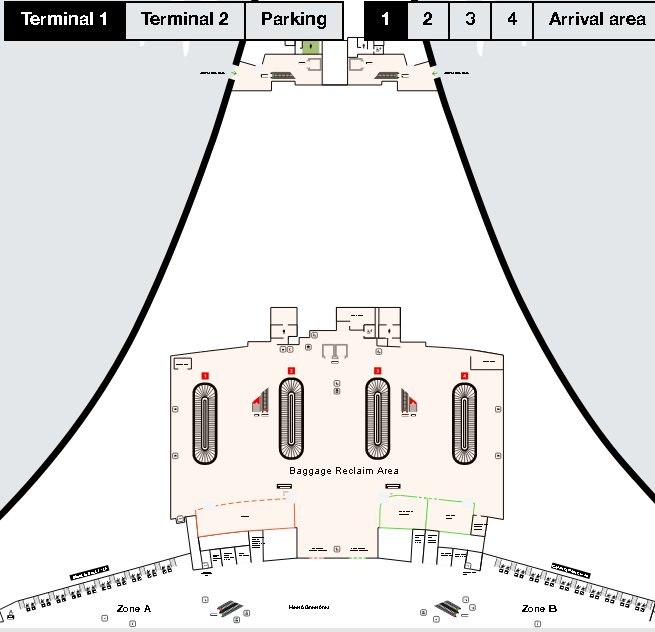 In 2019, 4,730,000 passengers used the airport to fly. That is a significant increase compared to a few years ago. Where it slowly grew from 1970 (500 thousand passengers) to 2012 (3 million passengers), the Baku Heydar Aliyev airport arrivals have grown well. There were 4.7 million passengers in 2019, but that dropped to just over a million due to the corona virus.

You can easily take a shuttle bus to the center and back, even 24/7. You will arrive at a metro station (28 May Metro Station) where you can continue to your destination. This route will take around 30 minutes depending on traffic. It will be a bit faster when travelling by taxi. This will cost 25-35 AZN.

If you drive yourself you should travel via the Zikh highway or the airport highway. When arriving at the airport you can bring your rental car back at the company or in case if it’s your own car just park in one of the available parking lots.

Most of those GYD airport arrivals are with AZAL Azerbaijan Airlines and Silk Way Airlines. Other airlines that have flights to this airport are:

Destinations go all over the world such as:

Baku Arrivals have increased by 50 percent in recent years. This just shows that it is becoming more and more popular.

There are also many Baku Heydar Aliyev flight arrivals from cargo flights. These flights are operated by Cargolux but mainly by Silk Way West Airlines. There are routes to destinations all over the world such as: