Bahrain is an island in the Persian Gulf, located between Dammam (Saudi Arabia) and Qatar. It is the only airport in the country to serve Bahrain international airport departures. It is home to national carrier Gulf Air who offer most Bahrain airport arrivals. Other common airlines with Bahrain airport departures are Kuwait Airways, Air Arabia, Etihad Airways, EgyptAir, Emirates. The airport has 1 terminal and 2 runways. The passenger numbers are growing slowly every year with a record in 2019 when 9.5 million passengers passed through. More than 27 airlines fly to more than 50 different destinations around the world.

The busiest airplane routes remain in the region. Yet there are also flights to Europe and Asia. Examples include:

There are many routes to India. The main destinations are Delhi Indira and Mumbai. Other major cities in Asia with flights to Bahrain are the following:

Most flights are operated by Gulf Air.

The first flights were already carried out in 1927. The first scheduled flights did start a few years later. This flight route was London-Bahrain-Delhi. However, during the Second World War, the airport was taken over by the US army forces. It was mainly used only as a stopover.

After the war, international flights increased. From Bahrain there were weekly departures to Singapore, Sydney, Karachi and Hong Kong. Major international airlines such as Singapore, Qantas, Air India and British Airways used the airport as a stopover with their large Boeing 747 aircraft.

A decade later, a new terminal was opened to meet the demand for air travel. In the 1980s, it had to be renovated and enlarged again. There was a special program to make this happen. This was finally put into operation in 1994. The maximum passenger capacity increased to 10 million per year.

In 2008 a new management came in. Again, it had to be renewed and expanded to 27 million passengers per year. The first part will open in 2021. There are new check-in halls and counters, security lanes, lounges, restaurants, etc.

The capital Manama is accessible by bus, taxi and rental car. Bahrain Airport is located northeast of the capital Manama about 20 minutes away. Depending on where in the city you want to leave for the airport, determines how you should travel there. From the north side you can go through the Shaikh Isa Bin Salman Causeway to continue on Airport Ave. From the south side, drive on the Prince Khalifah Bin Salman Causeway to turn left at the intersection on 21 and arrive at the airport.

If you plan to rent a car after arrival, you can. In the Bahrain arrivals hall (ground floor) there are several car rental counters such as Budget, Allied Car Rental, Hanco, Hertz, Prima and many more.

Once arrived at the airport, many passengers want to take advantage of the convenience of the taxi. There are taxis from the Bahrain Taxi Group as well as private taxi operators. Different prices will be used, so negotiate well. The Bahrain departures by taxi are located at Car Park B.

You can also travel to and from Bahrain airport by public transport. At the Bahrain airport arrivals level gate 3 and 4 is the bus area. There are different bus numbers. Bus A1 continues downtown with multiple stops at Manama Bus Terminal and Salmaniya. Bus line A2 also stops in the city center but continues to Souq Waqif, Hamad Town and the University.

You can also travel with Bus 10 or 11. They actually both make a round through the city back to the airport. Bus 10 goes below and bus 11 goes above and back. 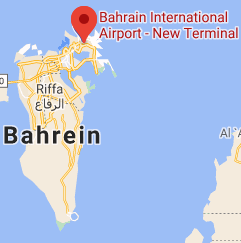 Bahrain Airport has two terminals, an old terminal and a new terminal for all Bahrain flight departures. The very modern new terminal was opened in 2021 and is much larger to have a capacity of 14 million passengers to be transported. An enormous growth was expected in 2020, but the corona virus threw a spanner in the works. 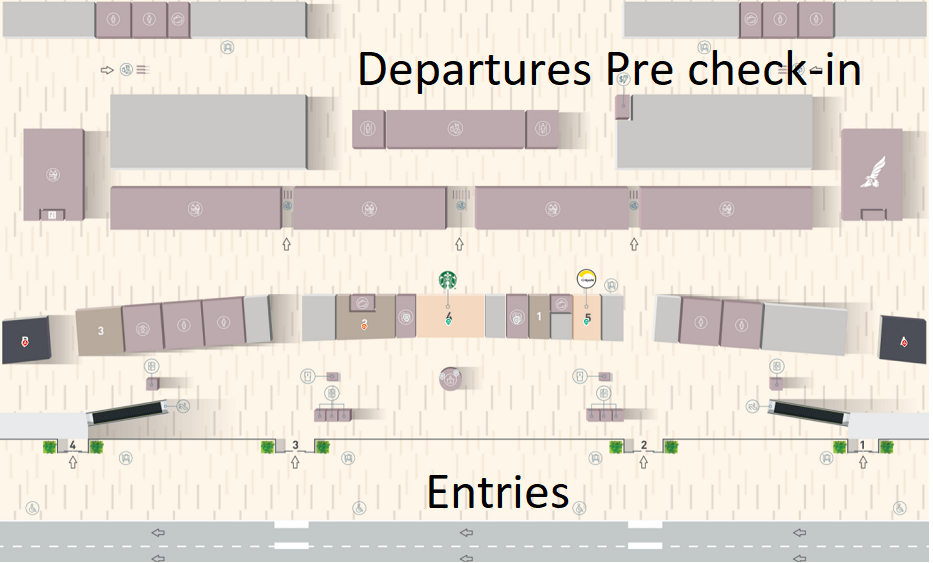 There are a total of 4 lounges in the terminal. There is one in the Bahrain arrivals hall. This is the Pearl Lounge with a quiet environment. The rest are located in the Bahrain departures hall. The Pearl Lounge offers the best of Bahrain’s traditional hospitality. The Gulf Air Lounge also has premium experiences and the Unaccompanied Minors Lounge is for the children with all kinds of toys, gaming, reading area and more.

There is a hotel located in the airport to stay in if you have late departures or a very early arrival. There are different types of rooms such as standard, family and compact. All have a TV, coffee/tea making facilities, shower and a bed. The hotel is located at Departures Gate 15.

In 2019 Bahrain Airport had 9,578,797 passenger Bahrain airport flights (BAH arrivals/BAH departures). There are about 50,000 Bahrain Airport departures (flights) per year. The major routes are in the region with more than hundred Bahrain flight arrivals from Dubai. Other important cities for Bahrain are Kuwait City, Riyadh, Abu Dhabi and Muscat. There are approximately 20 Bahrain airport arrivals from London.