Cairns is the largest regional airport in North Queensland. Located between the Great Barrier Reef and the tropical (Daintree) rainforest. The airport processes around 5 million travelers a year and has two terminals. One terminal is used for international flights and the other for domestic flights. In 5 minutes you walk from one terminal to the other. Australia Coach runs as a shuttle bus (for a fee) between the terminals.

The first Cairns arrivals took place in 1928 on a sandy runway close to the current airport. A few years later, the people of Cairns raised money for the construction of an airport. A 162 hectares of land was bought to make several buildings and runways. During World War 2 it was put into service by the Royal Australian Air Force. The main runway was paved and extended for use by the RAAF aircraft. After the war, the runway was extended again. The airport was also upgraded by renewing and expanding. The routes increased and with them the passengers. More and more regular scheduled services came to most Australian cities. The first international Cairns airport arrivals came from the airline Air Niugini which had a route from Port Moresby in Papua New Guinea.

In the 1980s, it was announced that further expansion was needed. There were several internships. The first phase was the further extension of the runway and the construction of a new terminal. This was completed in 1984. The second phase was started. This included a fire station, a new separate terminal for international traffic, and a taxiway. This was completed in 1990. In the year 1993, Cathay Pacific started operating flights from Hong Kong. Over the years, more innovations and extensions were made to the terminals and runways.

There are options to travel by bus after Cairns flight arrivals. There are Excellence Coaches for transport to the Northern Beaches, Cairns Center and Port Douglas. You can also book a taxi for private travel. Destinations are so naturally endless. You can also travel a little cheaper with the 1300 Ride Share or with Uber. These have Cairns arrivals at the eastern side of terminal 1 or the northern part at terminal 2. If you rent a car after Cairns airport flight arrivals, you can do so at Avis, Europcar, Budget, Hertz, Thrifty, National or Alamo. 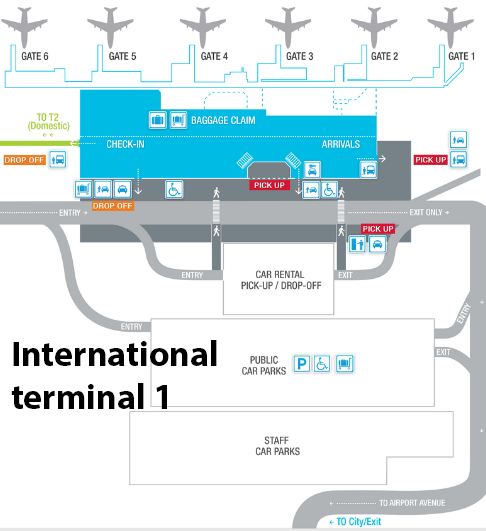 Cairns Airport has 1 runway of 3.156 meters (10.354 feet) which is of  asphalt for all CNS flight arrivals. There are two terminals in separate buildings for all flights. The first terminal, Terminal 1, is for the Cairns international airport arrivals. Although due to the pandemic the international flights and the use of this terminal is minimal in 2020 and 2021. The second terminal is for domestic transport and there are mainly Cairns airport arrivals from Brisbane and Sydney. 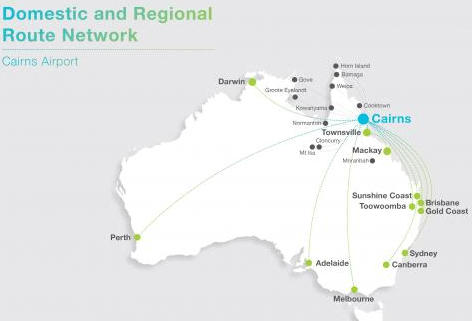 It is not a large airport, but under normal circumstances there are 5 million annual passengers. In 2020 there were 1.7 million which is a decrease of -64.3%. There are few international Cairns arrivals. Domestic flights will start to grow again in 2021. In addition to the aforementioned, Melbourne and Townsville are also important destinations. If the Cairns flight arrivals grow again, we mainly see routes from Asia such as: