Brisbane Airport (IATA abbreviation: BNE), is Australia’s third busiest airport after Sydney and Melbourne. The airport had more than 24 million passengers in 2019 (100 thousand Brisbane arrivals by aircraft) and 7,8 million in 2020. With more than a dozen national and over 40 international BNE airport arrivals, Brisbane Airport is an important gateway to Australia. It is the home of Virgin Australia, and an important base for Qantas and Jetstar. Travelers from Europe reach Brisbane often with a transfer in Asia like:

There are two runways and two passenger terminals for international and domestic traffic.

Brisbane’s first airport was Eagle Farm Airport. It was built in 1925 north of the city. There was also another airfield called Archerfield. The preference of most airlines is to surface to land here. During the Second World War, the airfield was used by the Supreme Commander of the Allied Forces. The American improved the airport to carry out military flights. The upgrade also made it a convenient airport for civilian flights after the war. Brisbane airport lagged with facilities and was unable to meet demand. For example, no long-haul flights could be carried out. a stop had to be added in Darwin towards Asian cities. A new airport was built close to the old one in the 1980s. With the opening in 1988, a new terminal (domestic) and 2 runways were added. A few years later, a new international terminal was added.

There is a terminal for domestic Brisbane flight arrivals and a terminal for international flights arrivals. This does not mean that every domestic flight departs from the ‘domestic terminal’ and vice versa. The terminals are 3 kilometres/2 miles apart and can be reached by an AirTrain. This train costs AUD 5, but is free for transferring passengers from Qantas and Virgin Australia. The train has every 15 minutes Brisbane international airport arrivals.

There is also the Tbus that runs between the terminals for the same price. Other than the train and bus service, the taxi (from 7:30 pm to 5:30 pm) is the only option.

This terminal was built in 1995. There are 14 gates available with connection options for the Airbus A380. There are four different floors. The first level is for baggage handles and offices. Level 2 can be seen below and is the Brisbane arrivals hall. On the third floor is the departure lounge and floor 4 is the check-in area. When you land at the airport, the plane closes at the terminal. After that you will walk from level 4 to level 2. Via passport control you enter the baggage claim area. Then you walk through customs into the Brisbane airport arrivals hall and you can continue your way. 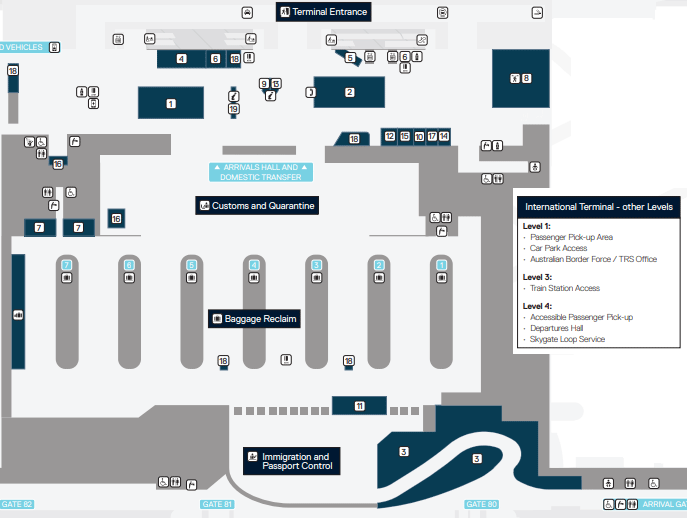 This terminal consists of only two floors. At the departure area there are 3 satellite arms to connect the gates with more planes. The check-in and gates are located on Level 2. There are also some gates (1, 2, and 3) on Level 1. The terminal is divided into three parts. There is a section for Qantas at the northern end and at the southern end is the airline Virgin Australia. Others are located in the middle. The domestic Brisbane arrivals hall is at level 1. From there you can easily walk out of the terminal and continue your journey by car, bus or air-train station.

Most Brisbane domestic airport arrivals are coming from Sydney Airport. Interesting to see that there is quite a big grow. For departure, check the Brisbane departures page. At rank 2 is Melbourne Airport followed by: 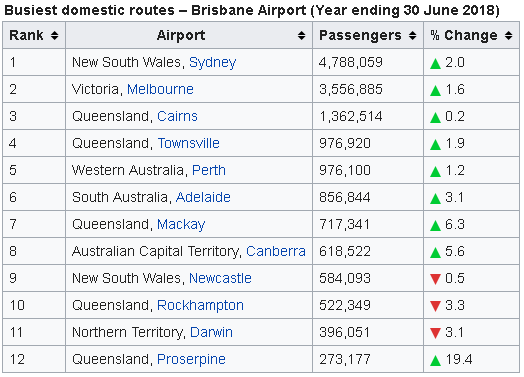