Alice Springs airport is a small airport. There are scheduled Alice Spring flight arrivals only from other destinations within Australia, with the national airline company Qantas, Virgin Australia and the Airnorth. Occasionally there are international Alice Springs Arrivals but most will be domestic flight routes. The airport is located about 12 kilometers south of the city in the Northern Territory province. Despite the fact that large planes can land, this does not happen that much. Many Qantas and Virgin flights operate domestic flights to other major cities in the country. There is 1 terminal and there are 2 runways.

The most popular routes are to Adelaide and Darwin.

Of course there are many flights heading to the big cities like Sydney and Melbourne too. In the year 2019 there were almost 600.000 passenger movements. Many of these are going to visit Uluru / Ayers Rock. Due the pandemic there were hardly Alice Springs airport flight arrivals in April and May and many others were delayed or canceled in 2020. Overall there was a decline of -62,3% with a total of 209.233 passengers that year. The year 2021 goes somewhat better. Other flight route options:

There is a short term car park in front of the terminal which is perfect who wants an easy drop off or pick up. Long term parking is on the left side of the building. For passengers who want to hire a car after their Alice Springs arrivals have plenty of options. 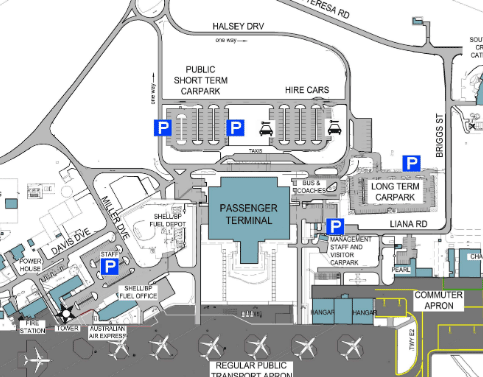 There are 2 runways available for ASP arrivals. However, 1 of them is 3,700 feet long so only available for small airplanes. The other one is 8,000 feet which is good for Alice Springs airport arrivals that can process bigger airplanes.

The first Alice Springs arrivals took place in 1921. Many years later the carrier Connair settled in Alice Springs. Not much later came the construction of Seven Mile Aerodrome because larger aircraft had to be able to land. In the early years it was used by the US and Royal Australian Air Force during the war. It was not until the year 1958 that the airport got its official name as it is now. A few years later, the longest runway was extended to 2,450 meters. The airport came into the hands of Northern Territory Airports Pty Ltd in 1989 who were given a 50 year lease with an option of another 49 years.