Tirana airport is in the local language ‘Aeroporti Ndërkombëtar i Tiranës Nënë Tereza’. Some people would call it  Rinas Airport. It is the largest and busiest airport in Albania and the location is north of the capital Tirana, about 12 kilometers away. It is the gateway to Albania and offers routes all over Europe but mainly to Italy. The airlines Wizz Air and Air Albania offer most flights from this airport. Pre-pandemic it processed more than 3 million passengers a year.

The current airport started in 1957 as Rinas Airport. Construction took several years. After the opening, there were only a handful of airlines offering a total of a few flights a day. After about ten years, several improvements were already made to the facilities. Due to political reasons, several airlines stopped flying to Tirana around the year 1978. In order to comply with international standards, many technological improvements were made in the 1980’s. It was not until 1992 when social and political transformations took place that many more different airlines came to offer Tirana departures. A few years later, the construction of a new terminal started. At that time, 600,000 passengers were transported annually.

The airport is easily accessible by car via various routes. It is easy to park your car close to the terminal. It’s free for the first 7 minutes. The starting price is approximately 1 euro per hour in one of the two parking places, but that gets cheaper the longer you park. Another option to take someone to the airport is the Kiss And Fly. You can park directly in front of the terminal. It’s free for a few minutes. After 4 minutes you will have to pay for this.

Nearly 2 million people fly from Tirana to Italy and back. Only at a great distance will Turkey, Germany, U.K. and Greece. Tirana departures with Blue Panorama Airlines is the most obvious with 21% share of all flights. 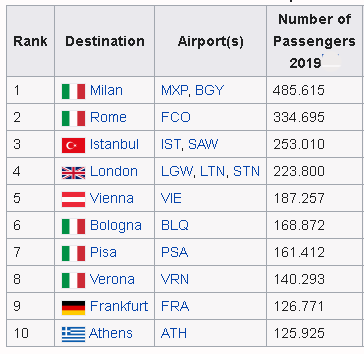 The airport is slowly growing with the exception of 2020 and 2021. In 2019 there were still 3.3 million passengers, but that has decreased by 60 percent. These many Tirana flight departures less ensure quiet times at the airport. Many flights went to Gatwick, Heathrow and Luton airports in London in 2020 with British Airways, Easyjet or Wizz Air. Wizz Air offers the most Rinas departures at the airport with many destinations in Europe.

As you have read, there are several options to travel to the airport. Once you have arrived, you walk into the terminal and you will already see various shops, a restaurant and a coffee bar. You have to pass those include the customs and security on your right hand to arrive at the check-in hall. Check the screens to see where you have to check-in. After the ticketing you will go to the security channel to arrive at the departures hall. There you will have some more place to eat and drink and some shopping with a duty free shop as well. There is also a terrace bar and smoking area. Now it’s just time to wait for boarding and depart for your destination. 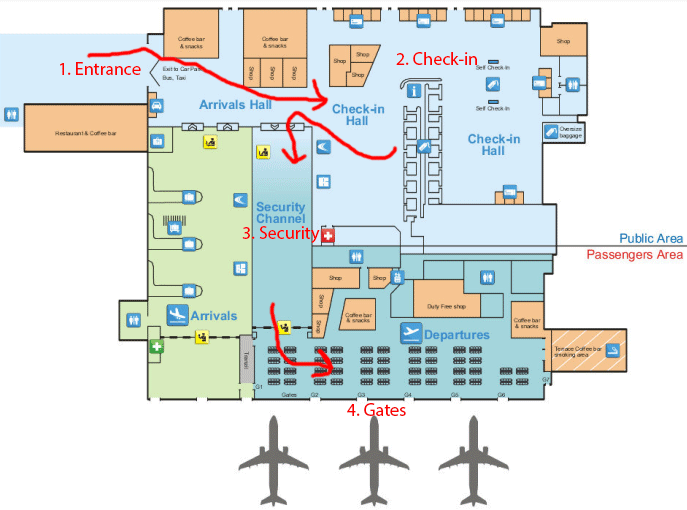 Since the airport is at least half an hour’s drive from the capital, it can be useful to spend the night near the airport. If you stay in a hotel near Tirana Airport, you can quickly walk to the terminal for check-in. This is especially useful if you have an early departure. Some options to stay: